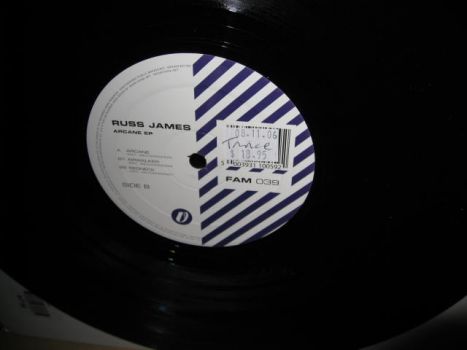 
Tracklisting:
A Arcane
B1 Airwalker
B2 Redneck

Russ James signed to Five AM records in 2005 and his debut release, the critically acclaimed Arcane EP was supported by high-profile DJs such as Ferry Corsten, Above & Beyond, Marco V and Lange. The follow-up This Is Music EP in September 2006 was heavily backed by Paul Van Dyk, where it claimed top place in his October chart. Five AM continues to explore the more inventive trance arenas with the 'Arcane EP' from 23-year-old Leeds-based producer Russ James. Redneck builds from just a kick-drum to an eye-wateringly busy sound set-up. Around the two-minute mark it drops in its signature loop. A chiming, every so slightly spooky cowbell spans the break, and comes out the other side.
More Information
Please sign in with your email address or Create an Account.
New Products
Compare Products
Compare
Clear All
You have no items to compare.
My Wish List
Last Added Items
Go to Wish List
You have no items in your wish list.
Vinyl Records Vancouver
Categories
Help
Quick Link
Newsletter