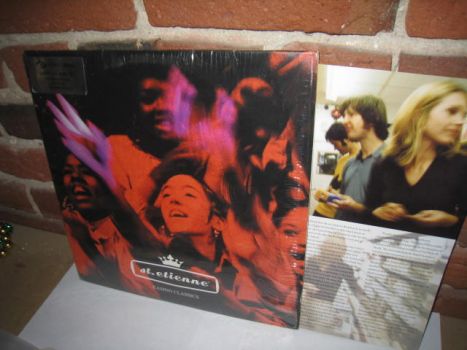 B1 Speedwell (The Aloof Remix)
Remix  Aloof, The


D3 Nothing Can Stop Us (Lionrock Remix)
Remix  Lionrock


Britain's premier dance-pop band of the 1990s; the Shangri-Las with synthesizers; the only group who can make you fall in love, break your heart, and dance your butt off simultaneously, Saint Etienne marked six years of consistent brilliance with a two-LP collection that pegged out 17 songs for the attention of the remix community, and wound up with a reinvention that defies any kind of categorization.


Contributions from the Chemical Brothers, Aphex Twin, David Holmes, Death in Vegas, Lionrock, and Underworld either predate or at least coincide with those acts' own mainstream breakthroughs, while Andrew Weatherall's "A Mix of Two Halves" assault on "Only Love Can Break Your Heart" spirals off Saint Etienne's first 12" single, released in summer 1990.


Elsewhere, Monkey Mafia's revision of "Filthy," from a hard-to-find compilation, recaptures one of the group's earliest rarities, and a clutch of new songs -- "Angel," "Burnt out Car," "The Sea," and "Sometime in Winter" -- offer the unusual experience of hearing the remix before you've even encountered an original version.

For anybody spellbound by the purity of Saint Etienne's "regular" releases, great swathes of this collection will certainly feel less than essential -- possibly unique among the club bands of its age, Saint Etienne works as ideally away from the dancefloor as it does on it, and hearing those exquisite arrangements and hooks hacked into electronic collops can be distracting -- maybe even infuriating. But, if you put your feet before your ears, Casino Classics has a perfection all of its own, and never a dull moment either.


We Brits should be proud of having produced St Etienne, an utterly contemporary sounding group who regularly flitted up the charts in the nineties with their sure footed pop sensibilities and Sarah Cracknell's languid vocals. They could effortlessly draw from the music of previous decades, yet were not afraid to be avant-garde, and at the same time had one foot firmly in the dance camp.

This is evidenced here by the cutting edge remixers they commissioned for the numerous white labels and B-sides they released and some they didn't. Some of the best are gathered within these covers: The Chemical Brothers, Secret Knowledge (Kris Needs), The Aloof (Jagz Kooner), Andrew Weatherall, The Aphex Twin, David Holmes, Death In Vegas, Lionrock, Underworld and Broadcast, many of them still unknown names at the time.

The highly anthologised Weatherall "mix in two halves" of Neil Young's Only Love Can Break Your Heart is present and correct as is the mighty 14 minute version of Cool Kids Of Death remixed by Underworld and the famous Trouser Assassin mix of Pale Movie.

Record 1 begins and ends with versions of Like A Motorway, while Record 2 bookends versions of a new song called Angel and features several other new songs and mixes, including the best track of all, a Monkey Mafia reworking of a 1991 B-side called Filthy, featuring the vocals of Q-Tee and a sample of Tone-Loc's Wild Thing


Saint Etienne - Only Love Can Break Your Heart (Weatherall Mix)


Saint Etienne - Who Do You Think You Are (Aphex Twin Remix)