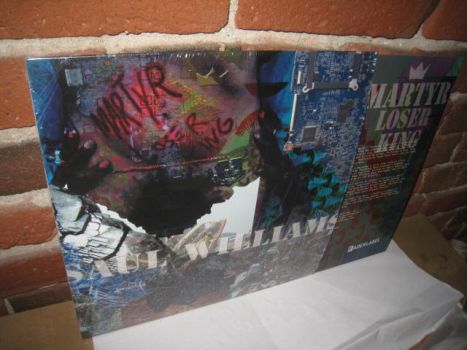 
Saul Williams returns to the beats that served him so well on the Trent Reznor produced "The Inevitable Rise And Liberation of Niggy Tardust" with album number 5 "Martyr Loser King" which is a clever play on the name Martin Luther King. On Williams last album "Volcanic Sunlight" went for an almost upbeat pop sounding album but that is all replaced by a heavy sound.

Some of the stand out tracks are "The Bear / Coltan As Cotton", "Brundi" which features Emily Kokal on vocals and "Roach Eggs". The vocals are spit out with meaning as always by Williams and whether you listen to his message or not you can't deny that it sounds great. As with all Williams albums there is a few samples thrown in and he knows where to use them for maximum effect. the album closes out with the epic "Homes/Drones/Poems/Drums". The album is produced by She Wants revenges Justin Warfield who plays the role of Trent Reznor on this album by also contributin guitars, programming and background vocals throughout the album.

If you are a fan of "Niggy Tardust" you will like this, if you are fan of all his work you will once be again impressed by his latest album and it deserves to be heard by a wider audience.
More Information
Please sign in with your email address or Create an Account.
New Products
Compare Products
Compare
Clear All
You have no items to compare.
My Wish List
Last Added Items
Go to Wish List
You have no items in your wish list.
Vinyl Records Vancouver
Categories
Help
Quick Link
Newsletter