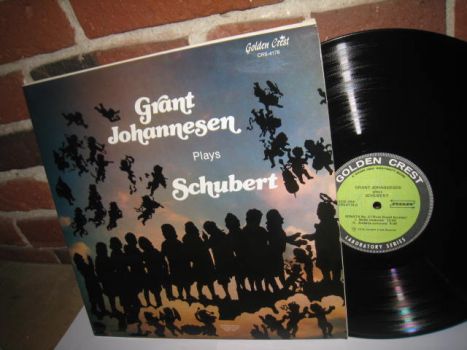 He was born in Salt Lake City and discovered at the age of five by a teacher who lived across the street. He imitated whatever he heard her play, and she did not appreciate it.

He studied with Robert Casadesus, Egon Petri, Roger Sessions, and Nadia Boulanger. He made his Manhattan recital debut when he was 23, and won the Concours International when he was 28.

He toured extensively, both with the New York Philharmonic under Dmitri Mitropoulos, and as a solo performer. His performances in Moscow were especially well received. He was once encored 16 times.

He was known as an interpreter of French piano music and recorded the complete piano works of Gabriel Fauré.

He served as director of the Cleveland Institute of Music from 1974 to 1985. He was a frequent soloist with both the Cleveland Orchestra and the Utah Symphony.

He was a National Patron of Delta Omicron, an international professional music fraternity. He was awarded an honorary doctorate of music degree from the The Hartt School, University of Hartford in 1993.

Johannesen was married to the Juilliard-trained composer Helen Taylor (whose works for piano were among his recordings) from 1943 until her death in an automobile accident in 1950. He was married to his second wife, the cellist Zara Nelsova (with whom he sometimes performed), from 1963 until their divorce in 1973. From his first marriage, he had a son, David Johannesen.

After his death David Johannesen completed the manuscript of Grant Johannesen's autobiography, wrote its foreword, and worked together with Peter DeLafosse at the University of Utah Press to shepherd the book "Journey of an American Pianist" through its publication in 2007.

Johannesen was a Latter-day Saint.

Franz Schubert's last three piano sonatas, D. 958, 959 and 960, are the composer's last major compositions for the piano. They were written during the last months of his life, between the spring and autumn of 1828, but were not published until about ten years after his death, in 183839.

Like the rest of Schubert's piano sonatas, they were mostly neglected in the 19th century.

By the late 20th century, however, public and critical opinion had changed, and Schubert's last sonatas are now considered amongst the most important of the composer's mature masterpieces. They are part of the core piano repertoire, appearing regularly on concert programs and recordings.

One of the reasons for the long period of neglect of Schubert's piano sonatas seems to be their dismissal as structurally and dramatically inferior to the sonatas of Beethoven.
In fact, the last sonatas contain distinct allusions and similarities to works by Beethoven, a composer Schubert venerated.

However, musicological analysis has shown that they maintain a mature, individual style. Schubert's last sonatas are now praised for their mature style, manifested in unique features such as a cyclical formal and tonal design, chamber music textures, and a rare depth of emotional expression

Opening of the Sonata in B-flat major
I. Molto moderato. This movement employs a three-key exposition. The first theme introduces a G-flat trill that anticipates the following harmonic events  a shift to G-flat major in the central section of the main theme, and, after a return to the tonic, an enharmonic shift to F-sharp minor at the start of the second theme.[28] After a colorful harmonic excursion, the third tonal area arrives in the traditional dominant key (F major). In contrast to the previous sonatas, here the development section elaborates on several different themes from the exposition. It reaches a dramatic climax in D minor, in which the first theme is presented, fluctuating between D minor and the home key, in a manner similar to the parallel passage from the previous sonata (see above). In the recapitulation, the bass line in the first theme rises to B-flat instead of descending to F (as in the exposition), and the second theme enters in B minor, instead of F-sharp minor. The rest of the exposition is repeated without alterations, transposed a fourth up, meaning that it returns to the home key, B-flat, for the third tonal area. The coda once again recalls the first theme, although only fragmentarily.

II. Andante sostenuto. This movement is written in ternary form, and the key of C-sharp minor  "the most tonally remote inner movement in Schubert's mature instrumental works in sonata form".[29] In the main section, a somber melody is presented over a relentless rocking rhythm. The central section is written in A major, and presents a choral melody over an animated accompaniment; it later touches upon B-flat major, the sonata's home key. The main section returns with a variant of the original accompanying rhythm. This time, the tonal scheme is more unusual: after a half cadence on the dominant, a sudden, mysterious harmonic shift introduces the remote key of C major. This eventually turns into E major, and proceeds as before. The coda shifts to the tonic major, but is still haunted by glimpses of the minor mode.

III. Scherzo: Allegro vivace con delicatezza  Trio. The first part of the scherzo proper cadences not in the tonic or dominant, but in the subdominant. The second, B part, continues to modulate by ascending fourths, until it reaches the key of D-flat major. In this key, a new theme is presented, emphasizing the local subdominant (G-flat major, a further fourth upward)  first in the major mode, then in the minor, with an enharmonic shift to F-sharp minor. This harmonic excursion eventually leads, through A major and a diminished triad, back to the tonic and the opening section. The trio is in binary form and in B-flat minor, the first presentation of the tonic minor in the sonata.

IV. Allegro ma non troppo  Presto. The finale has the same structure as that of the previous sonata. The main theme opens with an 'empty' octave on G, which resolves to C minor, subsequently interpreted as V of II in B-flat major. The second theme, in ternary form, is written in the traditional key of the dominant, with a central section in D major; it consists of a long, "endless" melody played over an uninterrupted flow of semiquavers. A third theme in dotted rhythm follows, beginning in F minor, fortissimo, and then shifting back to the major mode, pianissimo. This theme eventually leads back to the main theme of the rondo. The development section is characterised by clashing rhythms of juxtaposed eighth notes and triplets, reaching a climax on C-flat major, from which the bass descends to G to return to the main theme. In the coda, the main theme is fragmented in a manner also similar to the finale of the previous sonata; the octave on G here descends to G-flat and then to F, and the movement closes with a triumphant presto.
More Information
Please sign in with your email address or Create an Account.
New Products
Compare Products
Compare
Clear All
You have no items to compare.
My Wish List
Last Added Items
Go to Wish List
You have no items in your wish list.
Vinyl Records Vancouver
Categories
Help
Quick Link
Newsletter