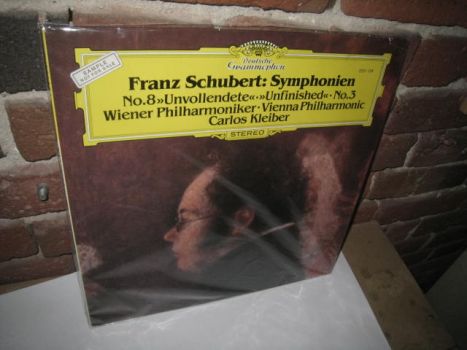 Skip to the beginning of the images gallery
Details
SCHUBERT - Symphonien No. 8 + 3
Vienna Philharmonic
Carlos KLEIBER

In the liner notes for his magnificent Schubert album on the Austrian Lotus Records label Alfons Kontarsky reminisces how one of his uncles once mourned the fact that the great composer's 8th Symphony remained unfinished as he "died with the quill in his hand". While Alfons humorously debunks this myth, it remains striking how Schubert's untimely passing has given generations the license to hear the voice of an pending death in such works as the late piano sonatas, the string quintet, the Winterreise, and the eight symphony. Yet, one often forgets that all of these works are the works of a young guy, who according to eye witness accounts could by no means be considered to be an over-sentimental whiner.

Growing up with the classics Cantelli recording of the "Unfinished" and getting the excellent Sinopoli version in the early digital days, these Kleiber recordings stayed under the radar for a long time. Although I had encountered critiques like the one from a frustrated Maestro below (No rooms available in Tuscany!), who claims that Kleiber is wrong since he himself directs this work differently, a couple of professional critics' "definitive performance" label fortunately swayed me.

While the young, dynamic and vigorous 3rd gets a top notch performance I will focus here on the 8th. Helped by a well recorded Vienna Philharmonic playing on the edge of its seat Kleiber, indeed, delivers again at his non-plus-ultra level. Debunking the whole mausoleum/requiem atmosphere it is striking what kind of work emerges after stripping away the bad habits of tradition. While the work is normally interpreted as pre-Bruckner, Kleiber shows like no other how much CPE Bach's Sturm und Drang pervades this work. In addition, and in a way that is similar to the Kontarsky brothers' monumental recording of Schubert's f-minor Fantasy, Kleiber makes no attempt to smooth over the "rough" edges of Schubert at times abrupt thematic transitions. Add to that Kleiber's tell tale photographic precision and a classical pulse and you get, what I consider, the unfinished symphony for the ages. While I can understand that Kleiber's approach can give some people the feeling that his version of the second movement lacks the sense of closure that other interpreters have added, I strongly advise them to read the aforementioned liner notes by the wise Alphons for a striking character study of the young mister Schubert.


These two symphonies give you the light and the dark of Schubert. In order to really enjoy this recording one must listen very carefully to the inner voices. Pianissimos are so soft you can barely hear them. Pauses are just slightly longer than expected and one of Kleiber's strengths is bringing out passages that one ordinarily doesn't hear. Also, this is one of the more muscular renditions of Schubert.


I gave Carlos Kleiber's 1978 recording of Schubert's "Unfinished" and 3rd (D Major) Symphonies 5 stars, but this is definitely for Kleiber's fans: and more about Kleiber than Schubert. Carlos Kleiber has become a cult figure with almost pop star following among music lovers the world over, largely because of his very small discography and frequent cancellations of live performances the last 20 years of his life. There is a certain mystery about Kleiber, and more is pondered about what he DIDN'T DO, as what he DID, both in recordings and live performances.
More Information
Please sign in with your email address or Create an Account.
New Products
Compare Products
Compare
Clear All
You have no items to compare.
My Wish List
Last Added Items
Go to Wish List
You have no items in your wish list.
Vinyl Records Vancouver
Categories
Help
Quick Link
Newsletter