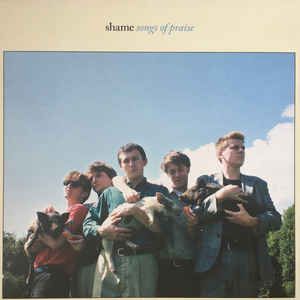 A1 Dust On Trial
A2 Concrete

B1 Donk
B2 Gold Hole

On calendar back:
Mastered by
[...] at Alchemy

Pressing plant is uncredited, derived from the runout stamps.

( pitchfork) ". “I hope that you’re hearing me,” he bawls eight times on “Concrete” but then self-lacerates one track later. “My voice ain’t the best you’ve heard/And you can choose to hate my words/But do I give a fuck?” he asks on the anthemic pop of “One Rizla.” He gives a fuck, but only about not giving a fuck. Shame don’t consider themselves special or important. Their sound isn’t all that inventive, their anger isn’t all that new. The latter, however, is as hot as a blue flame. It grows brighter as Steen repeats lyrical phrases again and again on almost every track until you’re forced to register his anguish.

If Shame belong to a generation of mobilizing British refuseniks teetering on an uprising, Songs of Praise is its soundtrack, whistling like a kettle coming to the boil. From beginning to end, its motorik riffs course through you the way a vat of dirty water journeys from a grimy cistern into an overrun toilet bowl. Steen’s knack for sordid imagery exalts him beyond his peers. Knowing the limitations of his gender and genre, he’s fine-tuned a charisma that hoodwinks you into listening to his enchanting tales from the underbelly. On “Gold Hole” (an indelicate descriptor for vagina), he tells the filthy story of a lecherous older man having an affair with a younger girl. “Sweat stains the wrinkles/Tongue touches the hole,” he roars, with a mix of Ian Dury cheek and the comical menace of Begbie from Trainspotting. “She feels so dirty, she knows that it’s wrong/But she feels so good in Louis Vuitton.” The luxury brand has never sounded less aspirational.

Steen is a playful vocalist. He spits in fits on “Lampoon” and “Tasteless,” he screams and pants nonsense on “Donk,” he narrates like a bored pervert on the standout “The Lick” (think Blur’s “Parklife” for a youth born too late to care what “Vorsprung durch technik” meant), and he laments tenderly on ballad “Angie,” an ode to a girl who committed suicide. "