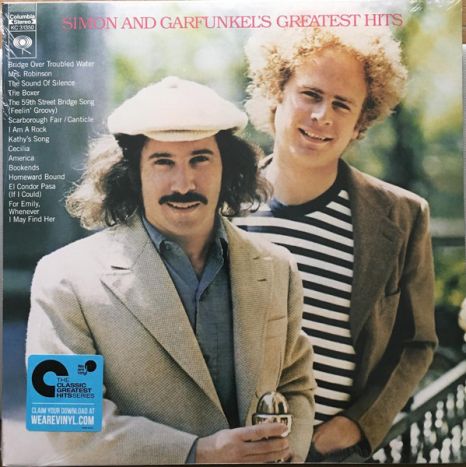 Released on June 14, 1972, two years after the duo had disbanded. It's a mix of original studio recordings and four previously unreleased live recordings.

There are also live songs on this album. The gorgeous song "For Emily, Whenever I May Find Her" is one of those songs. Though the clapping at the end is a bit loud, the song itself is one of the best versions available. Art Garfunkel shows in this song why his pairing with Paul Simon was so incredible. Another live song is "The 59th Street Bridge Song," which most know as "Feelin' Groovy." This song is a marvelous little ditty that shows the playful side of the duo. The clapping fits better here and lets you imagine the duo playing on a New York City street in the springtime.

"The Boxer" is a story song that is one of the best story songs of any era. Part folk, part rock, and all art, this song combines catchy and dramatic music with catchy lyrics and a poignant story that is simultaneously haunting and enjoyable. Another poignant song that fits well with "The Boxer" is "I Am a Rock." Both songs seem to offer introspective views of life and remind us all that we are responsible for ourselves.

"Homeward Bound" is a live song. This harmonious folk song is a wonderful addition to this collection. This song would be perfect for a movie soundtrack. This song rolls into another live song, the phenomenal "Bridge Over Troubled Water," where Art Garfunkel gets to show his vocal range. I do not know where this song was recorded, but the acoustics of the song itself are wonderful and highlight the power of the song and contrast between the soft opening and powerful ending.

"America" is another song that makes effective use of powerful vocals and music. This song is a celebration of country and seeking oneself as well as seeking who we are as a nation. The story in the song is deeper than the words suggest. This song is one of Simon and Garfunkel's greats.

"Kathy's Song" is a friendly little live song. This song is pretty, but is less dramatic and artistic than many of the other songs on this album. This song contained elements that foreshadowed the future of Paul Simon's music.

The following song is yet another incredible song. "El Condor Pasa (If I Could)" contains incredible music and vocals and is yet another of Simon and Garfunkel's greatest songs. The haunting panpipe used in this song makes it one of the most memorable songs in the duo's portfolio.

"Bookends" is a lovely little song that provides a significant contrast with the percussion driven ending of this album, "Cecilia." "Cecilia" is the most enthusiastic song on this album. The close out of this album, from "El Condor Pasa" to "Bookends" and ending with "Cecilia" was a brilliant way to close out the album. Rather than feeling melancholy, as the previous songs would have done, you leave feeling good and wanting to do it all over again.

There are many other collections of the works of Simon and Garfunkel, which often includes some of their solo works. However, at the time this album was released, this collection was the collection to have..