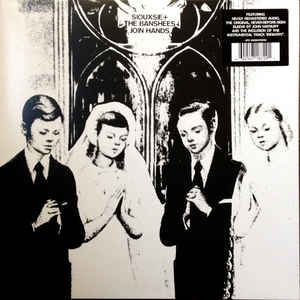 Join Hands is the second studio album by English post-punk band Siouxsie and the Banshees, released in September 1979 by record label Polydor. It was the last album with the band's first recorded lineup, as guitarist John McKay and drummer Kenny Morris quit the group after a disagreement at the beginning of the tour. Musically, Join Hands is in a darker vein than their debut album The Scream.

The record peaked at number 13 on the UK Albums Chart. One single, "Playground Twist", was taken from the album.


"The mix is different to the last album. Now there's a clarity which frames Sue's voice like it was a thing of treasure"


on Savage described the first track, "Poppy Day", as a "short, powerful evocation of the Great War graveyards in Flanders." He also wrote about "Placebo Effect": it "has a stunning flanged guitar intro, chasing clinical lyrics covering some insertion or operation." About "Icon", Savage wrote: "the brilliantly reverbed guitar is a perfect foil for Siouxsie's soaring and, for once, emotional vocal." Record Mirror also hailed the record, and qualified it as "a dangerous and volatile work which should be heard."

considered "Icon" the best track on the album, commenting that it "survives an unpromising beginning to open out into a faster main section with fuller vocal sound and gutsier guitar work",


Due to several of its songs, it is also seen as a precursor of the gothic rock genre by some critics, including Simon Reynolds. Its "funereal" atmosphere "inspired a host of gothic impersonators", according to Mojo, but "none of whom matched the Banshees' run of singles"

Siouxsie and the Banshees - Placebo Effect


Siouxsie And The Banshees - Poppy Day


Siouxsie And The Banshees - Playground Twist