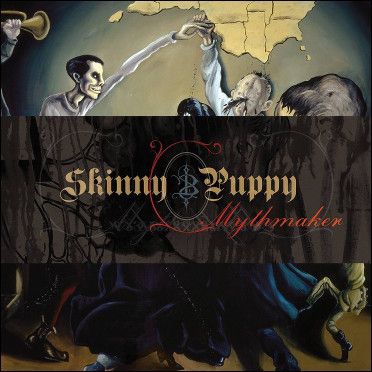 
Some are calling Mythmaker Skinny Puppy's most ambitious--and accessible--album ever. That may be sheer hyperbole but it is safe to say that Mythmaker may be the strongest SP LP in some time.

Many of the songs prove infectious--particularly the opening "Magnifishit," the atmospheric "Haze" and even the stomping "Pedafly." The group gets darker and more experimental with "Politikil," pauses for something different ("Ambiantz") and closes with the ultrafast "Ugli." For the most part, the record succeeds, but there are a few bum notes: "Lestiduz" serves a noodly bridge between two better, more focused tunes; "Jaher" is a mellow drifter that will probably polarize some listeners. However there's nothing that will prevent fans--both new and old alike--from growing the continuously evolving myth surrounding Skinny Puppy


Skinny Puppy returns with Mythmaker, their most ambitious record ever. As dark, beautiful, twisted and angry as always, Skinny Puppy take the listener on a roller coaster ride through their Industrial/Techno/Prog world. Look for the Skinny Puppy Song "politikil" featured on Jackass The Video Game. Cover Image by world renowned painter Manuel O'Campo.


Anyway, the newer Puppy sound is definitley more modern electronic to be sure. Although, what has not change(and shouldn't) is their core sound. The dark and grim atmospherics are still there. I do miss the horror film samples that I had fun figuring out which film they came from, but the lush complexities in the newer production style gives Mythmaker an epic feel. I notice also an Aphex Twin-esque influence with the trip-hop break-beats. The electronic drums have become WAY more intricate and varied which I think is a good thing. The beats will dance all around your head with this record. The melodicness is also great especially when paired with SP's usual dark themes. There is mild sampling on this album, but obviously not as much as past efforts. Most notable is the sample from Body Snatchers in Dal. Ogre's voice is distorted more than ever, and certainly more than his solo project, but its is more of a robotic distortion and less a monsterous one like the Puppy of old. To make a long story short, if you are a die-hard Skinny Puppy fan from way back AND also have an open mind then you will enjoy this album thoroughly. This is a great album filled with lush soundscapes and production, killer dark synth lines and the usual disturbing and violent lyrical imagery. Please don't even bother comparing this to past releases. This is 2007, not 1988. It is a modern Puppy, but this Puppy (bites) hard and doesnt let go until 48 mins later. Ogre and cEvin have done well. A must-have for true SP fans. Totally worth repeated listens.