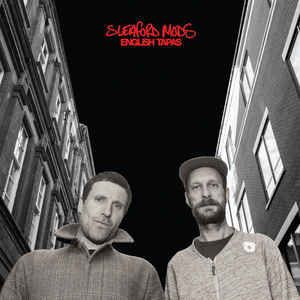 Barcode and catalogue number for this edition are stickered outside the shrinkwrap, covering the sleeve-printed generic numbers.

From the sticker on the shrinkwrap:
Limited Edition
Red Vinyl
[Rough Trade logo]

( pitchfork) " When Sleaford Mods broke out around 2013, Britain was in the grip of austerity, an economic philosophy applied by the Conservative-led government that seemed to inform both the duo’s downtrodden lyrical content and the pared-back clatter of their music. Those days, though, feel insipid compared to 2017’s geopolitical realities, this slow mudslide into state-sanctioned cruelty and small-minded authoritarianism. ENGLiSH TAPAS contains a few fleeting references to the state we are in, like nods to Brexit in “Cuddly” and “Dull.” A breathless rockabilly lurch, titled “Carlton Touts,” finds Williamson mock-mourning the dislodged elites that his lyrics once vilified: “Bring back the neolibs, I’m sorry/I didn’t fucking mean to pray for anarch-eh!” But it would be an overstatement to call this Sleaford Mods’ Brexit LP. Instead, ENGLiSH TAPAS mostly finds Williamson further honing the contours of his singular East Midlands vernacular, with special attention paid to the lifestyles of the tragic and washed-up modern male unable to meet even the low expectations that have been set for him.

“Army Nights” sets the tone, a bumptious opener sending up the special brand of idiocy that occurs in mess halls, stag dos, locker rooms—any place that men congregate without women. Elsewhere, Williamson returns over and over to the topic of alcohol and substance abuse—specifically, to the impulse to get out of one’s mind as a way of ignoring the misery of existence. “Messy Anywhere” is a lads-on-the-town chant that ironically undercuts itself at every stride. “Drayton Manored”—rhymed with “spannered,” meaning “extremely drunk”—is a lurid tale of home drinking, punctuated by the occasional taxi journey to restock, which Fearn mischievously illustrates with a supermarket checkout bleep. Williamson doesn’t hold back in his writing—quite the opposite. But he is never merciless, and his character sketches are shot through with a been-there wisdom, a sense of there-but-for-the-grace-of-God-go-I.

Williams is often typecast as a ranter, but ENGLiSH TAPAS is at least as funny as it is angry. Words erupt out of him with stray lines that stick: “Ya so dead in the head you got a job-facing life” (“Messy Anywhere”); “Car crash into the void of the Magna Carta” (“Snout”); “I had an organic chicken it was shit” (“Cuddly”). “Carlton Touts” boasts a chorus that somehow crams four good jokes into as many lines. But for all the humor, there is a palpable sense of desperation, a yawning emptiness that lies just beneath the surface. “Time Sands” muses on the drudgery of existence, the “quiet hell/Of cigarettes and trains and plastic and bad brains,” while “Dull” is utterly chilling, its dubby murk evoking cold English suffering as bleak as anything on PiL’s Metal Box."