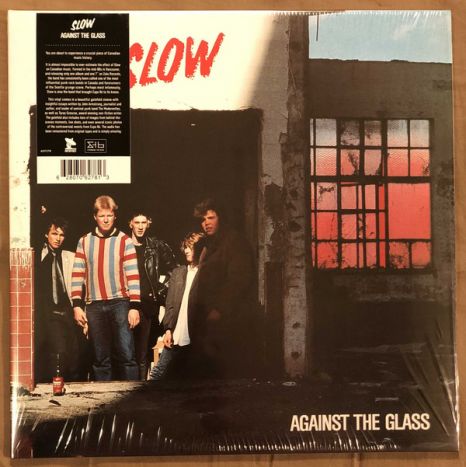 Slow ‎– Against The Glass

not sealed but unplayed

The next year, they put out the 12″ EP, Against The Glass.

This was the recording they would tour the pacific northwest with. It should be noted that the band did this during the mid-to-late-80s. They toured Seattle wearing lumberjack shirts and played grungey, 70s-influenced hard rock infused with punk. S0und familiar? Yes, these guys were the original inspiration for the Seattle Grunge movement of the early 90s. I once read a story, where Art Bergmann, of the K-Tels/Young Canadians was once approached by an American record guy about checking out a new group called Mudhoney. The guy was so excited about this great, brand new music and wanted to know what Bergmann thought about them. Bergmann dismissed the band as poseurs. So what? Weve got a group in Vancouver named Slow who are the real thing. (Or something to that effect, Im not actually quoting  just typing from memory).

Expo 86 riot
Slow are most famous for a controversial incident which both marred the Expo 86 festivities and effectively ended the band's career. On the opening night of the Festival of Independent Recording Artists, several people who were not attending the concert wandered into the pavilion, witnessed the band's outrageous live show, and rushed out to complain to Expo management. The officials turned off the power, ending the band's set. Hamm expressed his displeasure by mooning the audience, and Anselmi quickly followed suit, also exposing himself frontally.

The band were detained by the Vancouver police, who considered charging them with indecent exposure. Expo officials initially cancelled the evening's concert, citing security concerns.

Some of the fans in attendance got onstage and refused to leave the venue, others began to riot, and yet another group stormed BCTV's onsite studios, where they protested the concert's cancellation so loudly and persistently that the station had to pull its 11:00 p.m. newscast.

The following day, Expo announced the cancellation of the whole concert festival.

The band subsequently split up. Anselmi and Thorvaldson formed the band ©, while Hamm and Russell launched Tankhog.