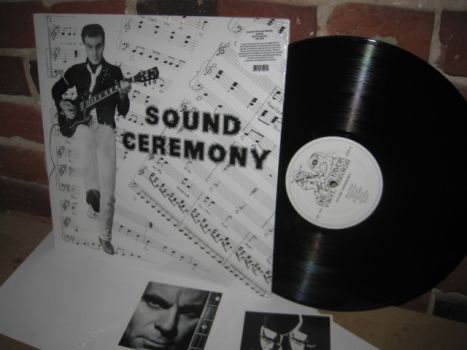 
We bring to your attention, an invitation to the bizarre." So goes the final song on Canadian born guitarist and songwriter Ron Warren Ganderton 1979 LP with his group Sound Ceremony. Ganderton self-released three LPs with the band while living in the United Kingdom during the 1970s and 80s. First came "Guitar Star" (1973), then "Sound Ceremony" (1979) and finally "Precious As England" (1981).


Despite some modest distribution and frequent gigs, the band never seemed to really take off and Ganderton eventually returned to his native Vancouver (where he still resides), leaving hundreds of unsold records in the attic of his house. While these copies seem to have been lost to the ravages of time, One Kind Favor will now reissue the second Sound Ceremony LP. All of the group's efforts are undeniably unique, but their middle record is the true brain-damaged winner of the bunch. The record surely fits somewhere into the UK punk explosion of the day, but it's also looks back to the mid-sixties rock that Ron cut his teeth on and ahead to some sort of maniac future form of entertainment that perhaps has not been invented yet.


Ganderton's mildly "out of it" stream of consciousness lyrics show a clear lack of self-censorship and that's really one of the albums strongest assets. He has created this character of himself as a huge rock star and a sex symbol, and who are we to deny his claims? The band chugs along amiably as Ganderton covers such terrain as his beating heart (it's made of rock), his distaste for education (he'd prefer to teach a lesson in bed) and his electric brain (which happens to be insane). If you've never heard a singer do a count-off all the way up to seventeen, then now is your big chance! Features what is perhaps the greatest anti-cigarette song of all time.
More Information
Please sign in with your email address or Create an Account.
New Products
Compare Products
Compare
Clear All
You have no items to compare.
My Wish List
Last Added Items
Go to Wish List
You have no items in your wish list.
Vinyl Records Vancouver
Categories
Help
Quick Link
Newsletter