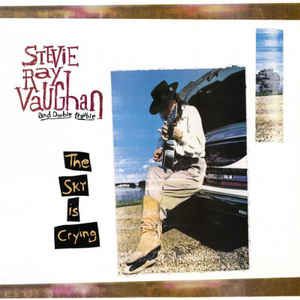 ( amazon)" Released after Vaughan's death in a 1990 helicopter accident, The Sky Is Crying collects unreleased studio tracks from throughout the guitarist's recorded career. In Vaughan's early years, he was a stylist who thought nothing of using ten notes when three would have worked. Rock stardom, cocaine, and alcohol did little to temper his tendency towards overstatement, but by In Step, his last studio album (and first clean-and-sober effort), he'd begun to transcend his many influences to forge a hard-boiled style of his own. The collection documents this passage, starting with unreleased covers of Lonnie Mack's "Wham" and Jimi Hendrix's "Little Wing" from the time of his debut album. "The Sky Is Crying" was originally cut by Elmore James, but Vaughan's lead guitar owes its stylistic debt to the bluesman who had a most profound influence on his playing, Albert King. The highlights are two tracks cut at the time of In Step--the hard-edged "Boot Hill," with Vaughan on slide guitar, and "Life by the Drop," in which Vaughan accompanies himself on acoustic guitar and toasts a life that would end far too soon. --John Milward"