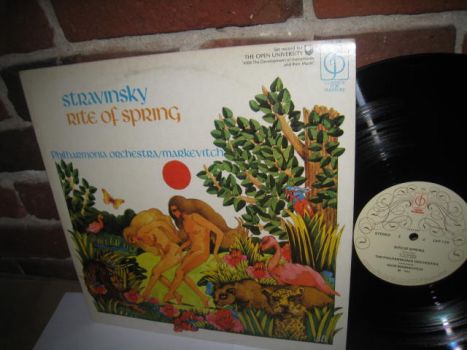 
A Part 1 The Adoration Of The Earth


B Part 2 The Sacrifice


Set Record for The Open University.
A304 The Development of Instruments and their Music.
1960
Made in Great Britain
Labels state Hawkes / BIEM

The Rite of Spring is a ballet and orchestral concert work by the Russian composer Igor Stravinsky. It was written for the 1913 Paris season of Sergei Diaghilev's Ballets Russes company; the original choreography was by Vaslav Nijinsky, with stage designs and costumes by Nicholas Roerich. When first performed, at the Théâtre des Champs-Élysées on 29 May 1913, the avant-garde nature of the music and choreography caused a sensation and a near-riot in the audience. Although designed as a work for the stage, with specific passages accompanying characters and action, the music achieved equal if not greater recognition as a concert piece, and is widely considered to be one of the most influential musical works of the 20th century.

This LP features the Rite of Spring performed by the Philharmonia Orchestra conducted by Igor Markevitch.

Mastery of the notes, combined with the spontaneity of the session, results in an unforgettable reading, one which finds all the elements, poetry, excitement, precision and mayhem, in perfect balance.

Composer/Conductor Igor Makevitch & Britain's leading Orchestra of the time, the Philharmonia, give us here as fine a recording of the Rite of Spring in '60 as we are likely to hear