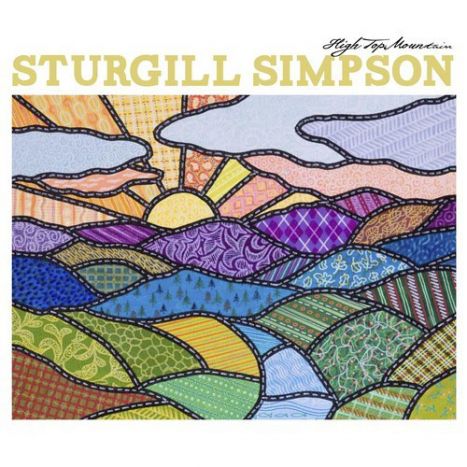 B7 Time After All
B8 Hero
B9 Some Days
B10 Old King Coal
B11 Poor Rambler
Written-By – Ray Cline*, Ralph Stanley

B12 I'd Have To Be Crazy
Written-By – Steve Fromholz*

Includes immediate download of 12-track album in your choice of high-quality MP3, FLAC, or just about any other format you could possibly desire.

.Sturgill Simpson's authenticity stands out like an island of hope in a sea of tacky. Pure and uncompromising, devoid of gloss and fakery. High Top Mountain’s dozen instant classics evoke the sound of timeless country in its many guises and brings back the lyrical forthrightness and depth that permeated the music Simpson absorbed during his Kentucky childhood. Bonafide mountain hillbilly soul, as pure as you are going to find anywhere.

"..The album opens with “Life Aint’ Fair and the World is Mean.” This always a favorite in the live setting, but Simpson no longer plays it live because as he rightly says he’s past this moment now. The song is about his start basically, trying to make it and thanking his family. And of course how life isn’t fair and how mean the world can be as he sets out to make music. I also love the line in this song about how the most outlaw thing he’s ever done was “give a good woman a ring,” sort of a subtle reminder to the outlaw label everyone loves to slap on any indie artist who makes traditional country music. “Railroad of Sin” is an absolute foot-stomper and pure bluegrass at it’s best. There are a few songs I would cite as the standouts on this record and one of them is “Water in a Well.” It’s your classic country heartbreak song, as Simpson explains their love has dried up like water in a well. “Sitting Here Without You” is essentially a companion song to it, as a man realizes his woman has been running around on him and he could have been out looking for someone else. Dave Cobb really nails the production on these two songs and of course is a big part of what makes Simpson sound so great.

Then we get to the fan-favorite, “You Can Have the Crown.” Simpson sings of being King Turd on Shit Mountain and if anyone wants the crown they can have it. The rowdy, steel guitar-laden track really puts you in the place of where Sturgill was just four to five years ago: an independent artist just getting by and praying he can find a record deal to feed his family. Fortunately for him that came, but then he was just making music with no idea what was next. And of course he was also trying to figure what the hell rhymes with bronco. My favorite of High Top Mountain though might be “Hero.” Simpson pays tribute to his father and how much he’s meant to him in his life. You can just feel how much this song means to him. The honesty and genuineness is just so palpable and is really felt by the listener. Another highlight is “Some Days.” It’s amongst some of Sturgill’s most truthful things he has written in his career and really the song that encapsulates how we can all feel on a shitty day"( country perspective)