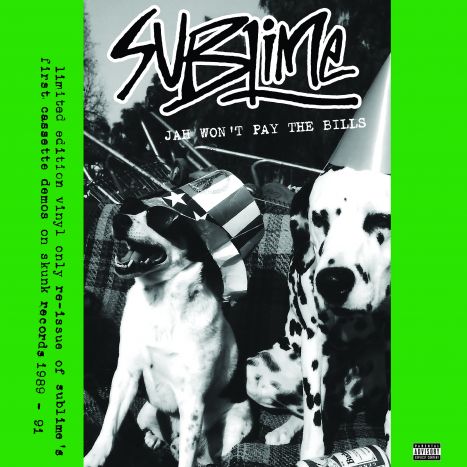 
25th Anniversary Record Store Day Exclusive. 420 Green vinyl out of the lot were randomly distributed to indie shops.
This is the black version


B1 Don't Push
B2 Ball and Chain
B3 Slowride
B4 Date Rape
B5 Live at E'sDrums, Vocals, Percussion  Marshall Goodman aka Ras MG
Lead Guitar  Miguel


A seminal band in American reggae, This year, re-released their debut album for 2016 April...record store day.

When thinking about music coming from the Golden State of California, it does not take too long before the band Sublime is mentioned in that elite list. When discussing the state of reggae music in the United States, most pundits point to Sublime as the foundation of American reggae and baton carriers following the Jamaican reggae invasion of Bob Marley and the Wailers in the 1970s.

In the late 1980s, Sublime was an underground sensation, that fans only heard of by word of mouth and at live shows. That all began to change when Sublime released a cassette titled, Jah Wont Pay the Bills in 1991.

The ten-track album was sold exclusively at Sublime shows out of the trunk of their car. The very first release from Sublime has become an extreme rarity in the reggae-rock community.

Now, with record store day rapidly approaching on April 16, 2016, Sublimes management and Skunk Records will be re-releasing Jah Wont Pay the Bills on vinyl for the very first time, as well as in its original form, on cassette.

Jah Wont Pay the Bills has been remastered from its original form by renowned mastering engineer, Brian Gardner. Gardner is known for his work with Michael Jackson, 2 Pac, Beastie Boys, Eminem and countless others.

The ten-tracks on the album feature Sublimes earliest recordings and demos from 1989-1991, prior to Sublimes breakthrough full-length album release, 40 Oz. to Freedom (1992).

Sublime is noted to have some of the most prominent and transcending sounds in modern alternative rock music, and that very sound can be traced back to Jah Wont Pay the Bills.