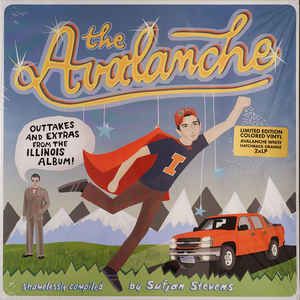 Tracklist
A1 The Avalanche 3:14
A2 Dear Mr. Supercomputer 4:40
A3 Adlai Stevenson 2:34
A4 The Vivian Girls Are Visited In The Night By Saint Dargarius And His Squadron Of Benevolent Butterflies 1:49
A5 Chicago (Acoustic Version) 4:40
A6 The Henney Buggy Band 3:16

Most of everything was recorded by Sufjan Stevens at The Buddy Project in Astoria, Queens, and at Sufjan's home in Brooklyn, NY, except drums and percussion on Springfield, The Henney Buggey Band, and No Man's Land, engineered by Casey Foubert at Home in Seattle, WA. The piano was recorded at St. Paul's Episcopal Church in Carroll Gardens, Brooklyn. The electric organ was recorded at The New Jerusalem Recreational Room in Clarksboro, NJ. The vibraphone was recorded at Carroll Music Studios, New York City.

( amazon customer) ' Sufjan Stevens has reached a new level in his musical career -- the point where every shred of his art is of interest.

That's where "The Avalanche" comes from -- it's all the worthy leftovers from Sufjan's opus "Illinoise." While there are some that were cut for a good reason, most of them are delicate, original and well-written. Even the worst of Sufjan's scraps are better than whatever is playing on the radio.

It opens with the title track, a folky little number that blossoms out with the inclusion of tense piano and a woodsy flute. It's a basic little song about homesickness and travel, which becomes something slightly odder by the end. "Come on, Snow!/Come on, Car!/Come on, Hands!/Come on, Feet!" Sufjan exhorts happily.

Then we get some new twists and turns -- he dabbles in electronica-edged pop in the peppy "Super Computer" and the shimmery "Inaugural Music," effervescent folkpop, quirky indiepop to dance to, bluesy balladry, and some concept tunes such as the eerie, spacey expanses of "Pluto." They ought to use that in a sci-fi movie.

The most amazing song on here is the delightful horn dance tune of "Henney Buggy Band," where you can only imagine people frolicking in the streets. It just overflows with fun. "Let the bugles play the sermon on the raid/I kissed you on the face/I kissed you on the playground!"