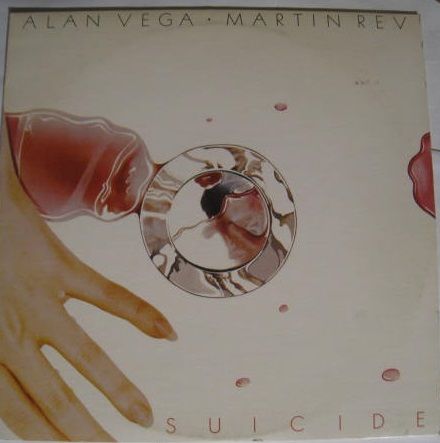 "After crystallizing a reputation for confrontational live performances and releasing their essential debut LP, Suicide went into the studio to record their stunning follow-up.

Producer Ric Ocasek lends a pop sensibility to the band's sound, constructing an atmosphere at once light and catchy, yet still crazed and venomous. Originally released in 1980 on ZE Records,

While his vocal treatments are more refined than before, Alan Vega is still cool as ice, visceral and evocative. Superior Viaduct is honored to present Suicide's under-appreciated second album.

If there can be a quintessential New York band, it is without a doubt Suicide."

Traces of classic pop become more prominent on Alan Vega Martin Rev, due in part to the involvement of the Cars’ Ric Ocasek, who was already a devoted Suicide fan before producing the album. The duo makes their intentions clear in the title of the first song, “Diamonds, Fur Coat, Champagne”: this is a shinier, more glamorous version of Suicide. Just listen to “Sweetheart,” whose lilting tropical-lounge swing is so glittery it makes “Cheree” sound like industrial noise.

But Alan Vega Martin Rev still boasts tons of gut-level grit, and the way the duo apply that to catchier tunes is fascinating. On heavier tracks “Fast Money Music” and “Harlem,” Rev’s knack for rhythmic loops that build without changing is stunning, as is Vega’s ability to shift cadences through those cycles. But even more thrilling are openly melodic pieces “Shadazz” and “Be Bop Kid.” The latter in particular sounds like doo-wop boiled down to its ideal, much the way the Ramones divined diamonds from the coal of classic rock.

There’s also something thrilling about how Suicide found their own space between scenes and styles. They overlapped with punk, post-punk, and disco, and are often cited as the godfathers of no wave. "