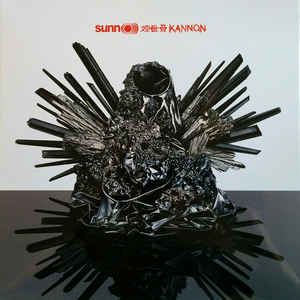 
Kannon is an album which was composed in the aftershadow of SUNN O)))s most recent successes in immersive collaboration (the group worked with Scott Walker on Soused, Ulver on Terrestrials in 2013 and 2014) and also from the broad and influential wake of their epitimous Monoliths & Dimensions . Kannon emerged both independently as a conceptual entity and with roots in the legacies of those projects, yet was fully realised years later, in 2015. The album is 36 minutes in length and consists of three pieces of a triadic whole : Kannon 1, 2 and 3.

The album celebrates many SUNN O))) traditions; Kannon was recorded and mixed with SUNN O)))s close colleague and coproducer Randall Dunn in Seattle, in Studio Litho, Aleph and Avast! ; and the LP includes performances by long term allies and collaborators Attila Csihar, Oren Ambarchi, Rex Ritter, Steve Moore and others. And at the core the composition centers around the dynamic and intense guitar and bass interplay of SUNN O)))s founders : Stephen OMalley & Greg Anderson.

Its possibly the most figurative album SUNN O))) has created, which is unusual as they usually dwell in layers of abstraction and subjectivity. On the other hand the album is the most outright metal in years, drawing personal associations and memories of cherished albums like Panzerfaust and Twilight of the Gods again to the forefront of consciousness. At the third time it is very close to the cyclical character of mantra which the band has evolved into as a living creature, the enormity of intense sensate detail and manifestation of the live in concert face of SUNN O))), the organism that has flourished, metamorphosed and transcended tremendously over the past ten years.

The literal representation of Kannon is as an aspect of Buddha : specifically goddess of mercy or Perceiving the Sounds (or Cries) of the World. She is also sometimes commonly known as the Guanyin Bodhisattva (Chinese) amongst a plurality of other forms. There is a rich lineage behind this idea tracing back through many asian belief systems, with as many names and cultural personifications of the idea .

How do you find yourself listening to Sunn O)))? What makes you decide to buy tickets to see Sunn O)), donning cloaks and floating in a sea of fog machine emissions in some small theater as the ceiling tiles shake and plaster cracks and crumbles from the sheer hellish volume they create? In the past I've listened to Sunn O))) out of morbid curiosity. Their music always felt like the beginning of some doom metal song stretched out for 10 minutes, then nothing.

Droning feedback, sub-level riffs quiver and quake under the weight of ample fuzz and d-tuned strings, and faint hissed whispers for vocals make their way out of the muck and mire of their songs. They seem adamant about what they do. There doesn't seem to be any hesitation in the delivery, so I think they're quite good at creating these dark passages of music. The lack of drums and any real discernible rhythm creates a wooziness whey you listen. Without drums pushing the song along the guitars create almost this sea of black we begin floating in. Stranded in this droning, doom-filled body of water our small vessel nearly capsizes as wave after wave of volume and squealing swells of noise crash on the bow. There is never a horizon with Sunn O))), just impenetrable blackness.

Kannon is the first true full-length record from Sunn O))) since 2009. It's not nearly the black hole of drone that Monoliths and Dimensions was, but very little is. What it is, however, is three songs that clock in at a little over 33 minutes and deliver on the promise of a new Sunn O))) record, which is sheer volume and dark atmosphere.

I was listening to Kannon Saturday night at home while my wife and I sat in the living room reading. About two minutes into "Kannon 2", the second track on the album my wife looked at me with a squinting look on her face and went "Ahhhhhh", pointing at the speakers. I said "What's wrong? Is it hurting your ears?", in regards to the screaching feedback and sub-level drone emanating from my Pioneer tower speakers. "Yeah. Just a little", she said wincing.


That's really all you need to know about Kannon. It's not for everybody, but it might just be for you. If you're at all familiar with Sunn O))) then you know what to expect. I will say this, "Kannon 3" has almost an upbeat feel in the drone-y delivery of the hellish squalls and shrieks. It has more of a sea chantey vibe, had a pirate ship been sucked into a wormhole and shot out into an alternate universe in slow motion. But overall, it seems to be business as usual. Which, I think overall is a good thing. There's certain bands you don't want to change all that much. You want them to retain those things that made them special and unique, whether it be ear-shattering volume, breakneck speed, chanting, or sludge-y, soupy riffs played at the speed of blood-tinged molasses dripping down a white canvas. Oh, and cloaks. Don't forget the cloaks.