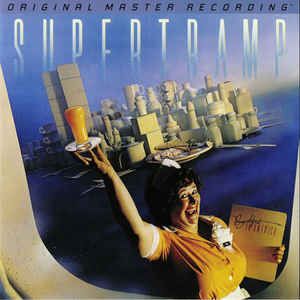 Mastered from the original master tapes

Supertramp's sixth album entitled Breakfast in America was a perfect example of the classic Dickens quote "it was the best of times and it was the worst of times". When it was released in March of 1979(25 years ago), the album was embraced heavily in the United States as the group had just come off the heels of their first Gold selling album with Even in the Quietest Moments, which was released in April, 1977(Crime of the Century went Gold after Quietest Monents went Gold). The album had three Top 20 hits guitarist/vocalist/occasional keyboardist Roger Hodgson's The Logical Song(a Top 10 hit hitting #6 in the spring of 1979) and Take the Long Way Home(peaked at #11 that December). Plus, keyboardist/vocalist Rick Davies' Goodbye Stranger(#19 that summer). Other standouts on this classic are Davies' haunting opener Gone Hollywood, which was a third person's view on the negativity of living in L.A., Just Another Nervous Wreck and Oh Darling(both also written by Davies). I also loved Hodgson's Lord is it Mine. Despite the fact that it's musically and lyrically a fun, warm and happy album, tensions between Hodgson and Davies were increasing during the recording sessions of this album. The title track to Breakfast Roger had written when he was 19 but Rick despised it and didn't want the song on the album. He also didn't want the album titled Breakfast in America neither, Roger won out on both counts. Casual Conversations was seen as Rick's stab at Roger and the closing Child of Vision was Roger's equivalent to Gone Hollywood and attack to Rick with Rick surprisingly adding in his responses to Roger's accusations and featured a burning sax solo at the end of the track by saxophonist John Helliwell whom is arguably the best sax player in rock. Despite all the turmoil, this disc went to #1 in the US(as well as Europe, Canada, Norway and Australia) and sold over 4 million copies in America(15 million worldwide). Hodgson felt that Supertramp should have ended with Breakfast instead of 1982's follow-up Famous Last Words although some fans disagree with his sentiments. 25 years on, Breakfast still holds up musically today.

The guitar solo at the end is to die for!

One Of The Best Songs!!!

When I was young, it seemed that life was so wonderful,
a miracle, oh it was beautiful, magical.
And all the birds in the trees, well they'd be singing so happily,
joyfully, playfully watching me.
But then they send me away to teach me how to be sensible,
logical, responsible, practical.
And they showed me a world where I could be so dependable,
clinical, intellectual, cynical.