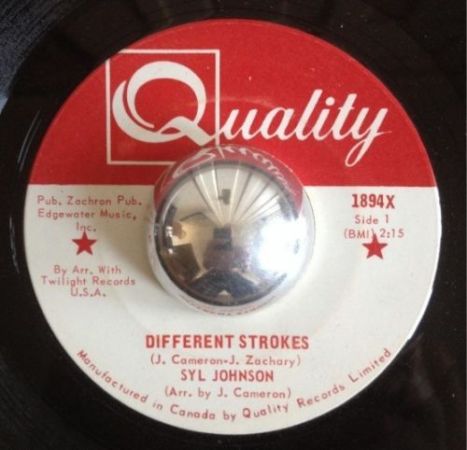 ( LA TIMES) . “I did ‘Soul Train’ and ‘American Bandstand’ out there,” said the singer and guitarist, whose 1967 hit, “Different Strokes” (with its signature grunts and laughs), was a calling card of sorts for Johnson. “I used to love L.A.”

The compilation and samplings of Johnson’s music by rappers such as Jay-Z and Kanye West have exposed the vintage artist to a new generation of listeners, and in turn, revitalized his touring career. “I don’t play venues that big, but I play ‘em big enough, and they’ve been selling out everywhere I go,” said Johnson, who plays at the Echo on Feb. 11. Last fall, he toured half a dozen dates across Australia, all sold out.

This resurgence is just the latest chapter in a remarkable 50-plus-year career that began in Chicago. Johnson, who was born Sylvester Thompson, is the sixth child of Mississippi sharecroppers. In 1950, he and his family joined up with the Great Migration out of the South and headed to Chicago. A prodigy on the guitar, Johnson began gigging with bar bands and studio musicians, backing such blues legends as Elmore James and Junior Wells.

His first break as a solo artist came with King Records in 1959, but the label didn’t like his name, insisting on releasing Thompson’s first single, “Teardrops,” under a new moniker: Syl Johnson.

His early singles leaned heavily toward the snappy sound of early R&B, but Johnson’s distinctive vocals, with their sharp crags and curling cries, were an obvious blues carry-over. But he struggled to land a hit, and by 1967, became a UPS driver to help ends meet. One day that year, Johnson recalls listening to the radio, “I was driving a truck at the time and my song [“Come On, Sock It to Me”] on WVON was No. 1. Man, I got out of that truck, and ain’t been in that truck since.”

His next single — “Different Strokes” — became one of his most iconic, with an opening as unique and memorable as any recorded in funk history: a heavy backbeat, punctuated by Johnson’s grunts, followed by peals of laughter from back-up singer Andrea Davis (later renamed Minnie Riperton). Johnson then attacks the mike: “Baby, you laughing/but I’ll be around for a while/yeah yeah/can’t you dig it, honey?”

“Different Strokes” may sound like a dance tune, but it’s a personal story of Johnson’s inspired from an intimate encounter with a new love interest. “She laughed at me!” said Johnson. “I said, ‘Baby you’re laughing, but I’ll be around for a while.’ That’s exactly why those lyrics got in there, because [she] laughed at me. I needed Viagra, but they didn’t make it then.”

Luckily, Johnson’s career had no such performance issues. He and the Chicago label he co-founded, Twilight (later renamed Twinight), were on a prodigious pace. In 1968, Johnson began working with a young producer out of Memphis, Tenn.: Willie Mitchell of Hi Records. Hi’s musicians backed Johnson on a few Twinight sides and Mitchell was eager to lure him over to Hi, dangling a lucrative advance … but only if Johnson could fly immediately to Memphis to begin recording. “I blew it. I neglected to do it,” says Johnson, and when he followed up with Mitchell three weeks later, Hi’s founder told him: “We’d like to sign you but we can’t make that deal that we were talking about … because we just signed a guy by the name of Al Green.”