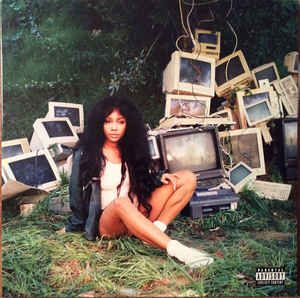 A3 Doves In the Wind
Featuring – Kendrick Lamar

Supermodel:
Recorded at No Excuses

Go Gina:
Recorded at No Excuses

Garden (Say It Like Dat):
Recorded at No Excuses

Normal Girl:
Recorded at No Excuses

Profile:
Solána Imani Rowe (born November 8, 1990), better known by her stage name SZA , is an American R&B singer. She was born in St. Louis, Missouri, later relocating to Maplewood, New Jersey. In October 2012, Rowe self-released her debut mixtape titled See.SZA.Run, which she then followed up with her second mixtape, titled S, in April 2013. In July 2013, it was revealed that she had signed to the hip hop record label Top Dawg Entertainment, through which she released Z, her debut extended play (EP) and first retail release, in April 2014. Her debut studio album Ctrl was released June 9, 2017.

SZA is a neo soul singer whose music is described as alternative R&B, with elements of soul, hip hop, minimalist R&B, cloud rap, witch house and chillwave. Rowe's lyrics are described as "unravelling", that revolve around themes of sexuality, nostalgia, and abandonment. SZA cites a variety of artists as influences including Meelah and Jamiroquai. SZA also takes influence from non-musical artists including gymnasts, ice skaters, painters, and filmmakers, including Spike Lee.

( Rolling Stones) " After a trio of promising EPs and a prominent feature on Rihanna's Anti, the budding alt-R&B star showed what she could do on a full-length LP. SZA unravels through largely improvised meditations on love and sex and all the promise and abandonment that can result from both. From a side-chick manifesto ("The Weekend") to the appreciation of a rom-com icon that mulls the singer's own self-worth ("Drew Barrymore"), SZA flourishes in her own hazy spotlight. B.S."