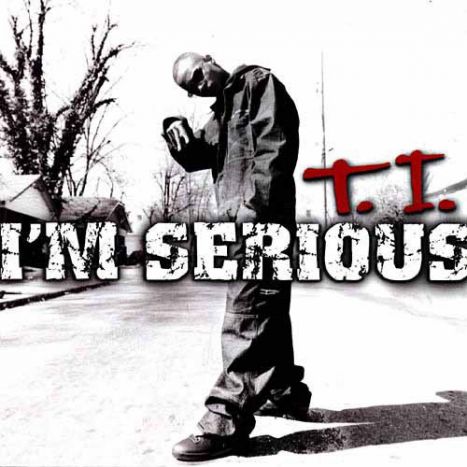 .T.I. is a tight rapper that only people from GA or the South ( in most cases) has heard of. His flow is sick and his country accent rivals that of Bubba Sparxxx. His lyrics are some of the better that come from the South; not quite spectacular but they are tight nonetheless. His beats are impressive though, with everyone from Organized Noize to The Neptunes contributing to this man's success. These producers realize the potential that T.I. has and they lend him some excellent tracks to rhyme over. PA ( Parental Advisory ) and Jazze Pha ( who's had success with Nappy Roots, Jim Crow, Too Short, Ludacris, Eightball & MJG and others ) also give him the star production that most underground rappers never see. He makes many references to many places in ATL like Campbellton Road, Old National, Bankhead, College Park etc. etc. and is really fun to hear him talk about places I know and have been. Props to T.I. for repping it right.

T.I. sounds far from an amateur on his debut album I'm Serious. His rhymes as mentioned before are tight as anyone's, and he has a superior dirty south flow. The voice is tight and he can flow fast or slow which means he doesn't use the same flow throughout the 2LP, which means a less boring listen. The production is off the hinges. The title song featuring Beenie Man, is a definite club banger, laced by the always-tight Neptunes. In fact this is one of the Neptunes best beats and Beenie Man delivers on the chorus. Whatz Yo Name also laced by the Neptunes, crafts a very soothing uncharacteristic beat from them that shows their versatility. T.I. rips up his verses as well. Jazze Pha laces Chooz U which is another one of his trademark futuristic riding beats. T.I. again shows his skills on this track; his storytelling is off the hook. This is one of the best songs on his album. Still Aint Forgave Myself is an ode to his fallen homies and his guilt of being the one that lived. Outstanding. The best song on the album though, has to be the Too Short collaboration Hotel, with PA giving T.I. one of their best beats. The beat is just so relaxing and pimped out. T.I.'s storytelling is at the forefront on this song and he doesn't disappoint. He even outshines the Original Pimp Too Short at his own game, and that is a feat that few others have accomplished.

Overall T.I. is lined up to be the next great thing that the South has to offer. Maybe with his next album he will blow up