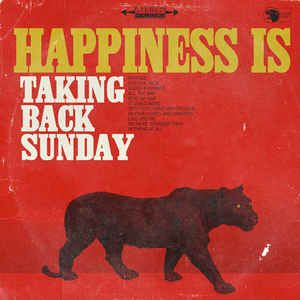 Taking Back Sunday - Happiness Is

Tracklist
A1 Preface
A2 Flicker, Fade
A3 Stood A Chance
A4 All The Way
A5 Beat Up Car
A6 It Takes More


Tracks A1, A2, A4, A5, and B5 produced and recorded at Rancho Recordo in Fenton, Mi
Tracks A3, A5, and B1 to B4 produced and engineered at Sapone Productions, New York
Mixed at Atomic Heart Studio, NYC
Mastered at Marcussen Mastering, Hollywood, CA


Happiness Is is the sixth studio album by American rock band Taking Back Sunday, released on March 18, 2014 through Hopeless Records.
The album, produced by Marc Jacob Hudson and Mike Sapone, is the second consecutive album to feature the band's revived lineup of vocalist Adam Lazzara, guitarist/vocalist John Nolan, guitarist Eddie Reyes, bassist Shaun Cooper and drummer Mark O'Connell
Gregory Heaney rated the album four stars out of five, stating that the release "shows that they've honed their skills, creating a beautifully crafted, well-constructed album that feels like more than merely a collection of songs, but rather an album full of soaring builds and heartbreaking collapses that lends credence to the notion that the best things come to those who wait..

Thats not to say the band are stuck in nostalgia mode; judging by Lazzaras lyrics, TBS are very much constantly maturing, with the singer digging deeper than he ever has on the incredible album standout Better Homes And Gardens. Instead of trying to tell you what the song is about, Ill let Lazzara do the dirty work: When you took that ring off/I sat there stunned/Parked out in my car/Surprised by what youve done/The courage that mustve took left me utterly speechless/And though it came as no surprise, I still couldnt believe it. But Lazzaras not taking it lying down; he fires back in the songs bridge, crooning, So just go on/That house that you hate/That house that we bought/And failed to make/It was all for nothing/It was all a waste/And now youll never be happy. Brutal.

Along with Better Homes And Gardens, the records most memorable moments are its most aggressive ones: The minor-key Beat Up Car has small spurts of vocal tradeoffs between Lazzara and Nolan leading into a propulsive chorus that bounces between time signatures as a high-pitched guitar lead and deliberately uncomfortable vocal harmonies appear throughout. It segues nicely into the five-minute It Takes More, one of a number of ballads on Happiness Is, but easily the most memorable due to some haunting piano and an explosive final chorus at the three-minute mark that just keeps chugging, adding in new, interesting elements from howled backing vocals to what sounds like some guitar backmasking to a sound collage that is kindred spirits with the Beatles Revolution No. 9.