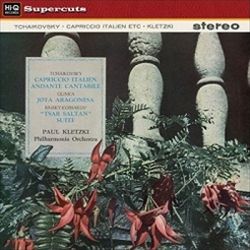 Cut at Abbey Road Studios from the Original Stereo Analogue Master Tapes
"A selection of delightful Russian music, brilliantly conducted and beautifully played..." said Gramophone on this album's stereo release in July 1960. This atmospheric and superbly recorded album displays all conductor Paul Kletzki's hallmark qualities: precision of ensemble, clarity of instrumental detail and warmth of orchestral sound and has long been a collector's item.

Although Kletzki is now remembered as primarily a conductor, it was as a composer that he first made his mark in the 1920s and 1930s. He came to the attention of Toscanini and Furtwangler, the latter who permitted Kletzki to conduct the Berlin Philharmonic Orchestra in 1925 and championed his many compositions. His bitter personal experiences of the Second World War, however, in which he lost many of his family, appeared to destroy his creative spirit and he stopped composing in 1942. The rest of his career was devoted to conducting. He made several recordings for EMI in the '50s and '60s.

This performance was recorded on August 30 and September 3-4, 1958 at the Kingsway Hall, London with legendary producers Victor Olof and Peter Andry and engineers Harold Davidson and Robert Gooch. This vinyl reissue from Hi-Q Records was cut at Abbey Road Studios from the original stereo analogue master tapes with the Neumann VMS82 lathe fed an analogue pre-cut signal from a specially adapted Studer A80 tape deck with additional 'advance' playback head, making the cut a totally analogue process. Pressed on 180g vinyl to audiophile standards using the original EMI presses by The Vinyl Factory in Hayes, England. Features the original album artwork.

"Paul Kletzki has something of Beecham's genius for giving new life to moribund musical showpieces, and he uses the same methods: nicely-judged tempo, beautifully-tailored melodic phrasing, firm rhythmic accents timed to a split second, and an emphasis on significant detail... The Philharmonia... is at its brilliant best... the recording is clear and well rounded..." - Gramophone