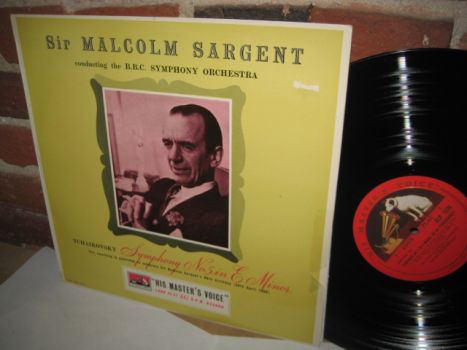 Record is VG++
Cover is laminated , has a small tear top right
Back cover of flap jacket has 3 inches handwriting


features Sir Malcolm Sargent and the BBC Symphony Orchestra's powerful account of Tchakovsky's Symphony No. 5 in E minor Op. 64, issued by HMV to mark the conductor's 60th Birthday on 29 April 1955. In addition to liner notes on Tchaikovsky's Fifth, there is also a brief, but interesting, biographical sketch of Sargent, in which it is noted that his first HMV sessions were in 1924.

Sargent was held in high esteem by choirs and instrumental soloists, but because of his high standards and a statement that he made in a 1936 interview about musicians' rights to tenure, his relationship with orchestral players was often uneasy. Despite this, he was co-founder of the London Philharmonic,


Sir Malcolm Sargent conducts the London Symphony at Walthamstow Town Hall, London in a beautifully colorful interpretation of Tchaikovsky's infamous 5th Symphony. The Fifth Symphony was at first considered a failure by the composer after its first few performances were poorly received. Further performances proved to the composer and the critics that, in fact, this great Symphony was worthy of further consideration and ultimately widespread acceptance. Orchestras around the world now perform Tchaikovsky's 5th Symphony routinely to the thrill of their audiences.
More Information
Please sign in with your email address or Create an Account.
New Products
Compare Products
Compare
Clear All
You have no items to compare.
My Wish List
Last Added Items
Go to Wish List
You have no items in your wish list.
Vinyl Records Vancouver
Categories
Help
Quick Link
Newsletter