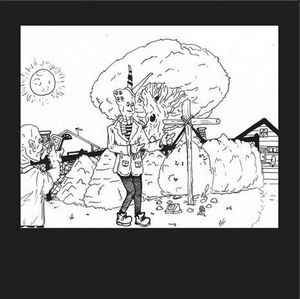 sam is one of a small handful of true geniuses making music...it" is so next level it's not even funny, there is nothing else in the world like that album,

( pichfork)  " you couldn't tell from the title or its 26 tracks or 69-minute length, It's the Big Joyous Celebration, Let's Stir the Honeypot is A) a glorious communal blowout and B) goddamn mess. Its intentions are messy: Sam Ray resurrected his old band by popular demand (vis-à-vis his other projects Ricky Eat Acid and Julia Brown), yet they are also calling it their last will and testament. Its presentation signifies wild ambition, but Ray appears more interested in capturing fleeting bits of casual brilliance than making good on grandiose designs. The ugliest song is called "Beauty," one of the prettiest is "Neighborhood Drug Dealer." It's constantly absorbing and equal parts astonishing and frustrating. It's a party you can hear from down the block and yet still requires a password at the door.

Ray's ascent as an indie/DIY auteur has been propelled by his prolificity and his equally active desire to circumvent any barrier between him and his listeners. This personality (or persona) is as crucial to full appreciation of Celebration as the music. As he shows with his projects outside of Teen Suicide, Ray is direct, omnivorous and unpredictable: Celebration feints at stop-start post-punk, patches in some nifty acoustic progressions on loan from Alex G's Beach Music, flirts with psychedelia and throws out some jazz noodling as well. And this is just the first song.

At their core, Teen Suicide is the most "indie rock" of Ray's projects and in that form, they write poignant song-sketches that can traffic in sarcasm ("it's not art unless you laugh, one of these days I'm gonna laugh") and have a poignant sweetness ("Falling Out of Love With Me"). But the lo-fi recording quality serving as Celebration's binding agent has a far greater effect the further Teen Suicide get away from guitars. The resplendent piano rolls of "I Don't Think It's Too Late" and "The Stomach of the Earth" are slightly scuffed and distorted, like a tear-stained take on the Range's recent emotronica. "My Little World" touches on Aphex Twin's early ambient work, while the crackle surrounding the harps and strings on "V.I.P." carry the haunted-house eeriness of the Caretaker's Victrola memory experiments. It's hard to think of any album, probably ever, that managed to sound like these three and Sparklehorse in the same hour.

His use of tape manipulation and sampled orchestral bric-a-brac dutifully marked in the treasure map-like credits (Girlpool, Elvis Depressedly, Alex G, Porches, Owen Pallett and more) put him in the lineage of Elephant 6, Microphones or early Saddle Creek. But Teen Suicide's crucial novelty lies in how they connect modern forms of communication and dissemination—it's a celebration of how Bandcamp and Soundcloud can allow songs to be released in an instant while constantly mutating (this was not invented by The Life of Pablo) and, of course, any form of social media.

Most of the lyrics appear to be trimmed to fit for maximum impact within a character limit and even if they're not necessarily about him, Ray takes advantage of the presumption that songwriting is an autobiographical mode. As a result, the listener is inclined to relate to the person going through the harrowing narratives here. They all read like casual conversations, but the kind you can only have when the speaker has a total lack of a filter and a complete trust in the person on the other end. Some of his best lines are brazen provocations ("depression is a construct"); many sound like jokes but are devastating insights about drug abuse and suicidal ideation. Most importantly, they're very, very quotable. Witness the best of the lot: "Pavement were an OK band/but you don't gotta sound like them."

This isn’t some kind of Kill Yr Idols mission statement—Celebration has enough ’90s indie rock in its genes to suggest that Ray thinks Pavement were at least OK. But most of Ray’s colleagues in Orchid Tapes or Run For Cover or any of the leading figures in post-emo are developing intensely dedicated, often young fanbases without the previously established means of generating sustainable indie rock success or the previously established canonical influences. The bands they sometimes remind me of—Bright Eyes circa Fevers & Mirrors, for instance—won only begrudging respect from older listeners at the time it was released. The directness with which it speaks to its audience makes it easy to imagine Celebration inspiring a lot of its younger listeners to start a band. For anyone else, it’s just an inspiring testament to indie rock’s continued vitality".