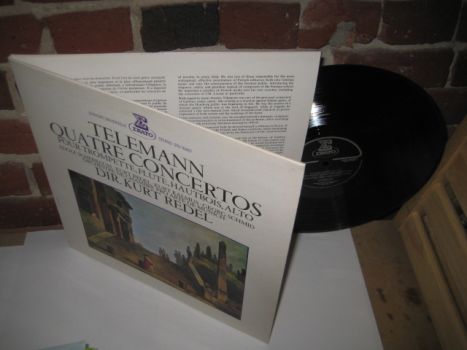 
Concerto For Trumpet: String Orchestra And Continuo, In D-Major

Concerto For Flute: String Orchestra And Continuo, In D-Major


Concerto For Oboe: String Orchestra And Continuo, In E-Minor


Concerto For Viola: String Orchestra And Continuo, In G-Major


In recent decades period instrumental performers partial to the Baroque era have greatly increased Telemann's visibility. J.S. Bach, G.F. Handel, and Telemann all came from Lutheran north central Germany and knew each other, at least, in the case of Handel and Bach, by correspondence.
But while, as young men, Bach and Handel burnished keyboard skills to virtuosic levels, Telemann was busy seeking out and learning to play all the known instruments of his time.
So bassoonists, oboe players, cellists, also horn and trumpet players, recorder players and flutists, even clarinetists and trombone players have all manner of solo pieces and combinations of their instruments available to them in Telemann's chamber and chamber orchestral music.

Telemann was a child prodigy who had to keep his skills largely under wraps because of the ambitions of his widowed mother. She wanted him to go into law at the University of Leipzig, rather than the relatively low status of musician (she finally relented).

Telemann shared with Bach what might be called a "fourth dimensional musical memory". Whereas Bach preferred to use his gift to create seamless linear counterpoint of unequalled depth, Telemann rejected what he regarded as excessive formalism. Instead, he exploited "orchestral counterpoint", demonstrating one of the keenest and most creative ears for instrumental sonorities among all composers in history. His limitless creativity in combining rhythm, harmony, and unexpected shifts of mood have too often been buried by insensitive or oblivious performance styles. But the popularity and exotic flavor of Telemann's Polish folk-influenced works - which in fact brought him out of the shadows for me back in the 1980s - have helped get some of these qualities to wider attention
More Information
Please sign in with your email address or Create an Account.
New Products
Compare Products
Compare
Clear All
You have no items to compare.
My Wish List
Last Added Items
Go to Wish List
You have no items in your wish list.
Vinyl Records Vancouver
Categories
Help
Quick Link
Newsletter