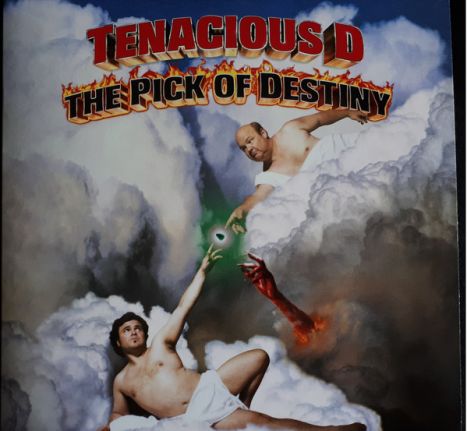 B1 Dude (I Totally Miss You)
B2 Break In-City (Storm The Gate!)
B3 Car Chase City
B4 Beelzeboss (The Final Showdown)
B5 POD
B6 The Metal

Tenacious D is an American comedy rock duo, formed in Los Angeles, California, in 1994. It was founded by actors Jack Black and Kyle Gass, who were members of The Actors' Gang theater company at the time. The duo's name is derived from "tenacious defense", a phrase used by NBA basketball sportscaster Marv Albert.

"Classico" is the first of several tracks on the album that pays homage to tunes from the band's past work (same Bach piece Kyle played in "Rock Your Socks Off" from the first album) while adding a new spin to it. Many reviewers have complained that some of the songs on this LP are too short to enjoy but this is a great example of one that is just long enough to appreciate - once again, brilliant combination of KG's masterful guitar-playing and JB's over-the-top lyrics ("When you rule, you f---in school, all of the fools, out of their jewels).

Unlike, "Classico", "Baby" is one song I really wish was longer than it turns out to be on the album. It's a soulful tune that provides just enough harmony and guitar that it might have earned some playtime on the radio if it were fleshed out into a full song, especially when you consider there are no swear words involved. It's of my favorite songs to sing along to, even if it only lasts barely over a minute.

Although "Destiny" only serves as a transition track with a couple lines from the movie, what's nice about the small snippet is that Jack sings the same short vocal riff that preceded each of the HBO specials, the same one that would play as they entered the open-mike night bar - another treat for hardcore D fans. This is nicely followed by "History", another song that longtime D fans would undoubtedly recognize from the HBO specials and other appearances. This version is slightly extended, with added lines like, "We've run with wolves, we've climbed K2, even stopped a moving train", and it's nice to finally have a real version to play.

"Master Exploder" is, just like "Classico", just enough Tenacious D brilliance and ridiculousness to warrant repeated playbacks even though it is a short piece. With lines like "I did not mean to blow your mind, but that sh--happens to me all the time!", this track is a perfect example of why Tenacious D fans can't get enough of them - if you understand the sarcasm behind their seemingly over-the-top arrogance, you can't help but enjoy them for what they pretend (believe?) to be: the greatest band on earth.

"Papegenu" may seem a little strange if you haven't seen the movie, but once you see the scene you'll understand the meaning behind the weird use of a recorder and lots of dialogue between JB and Sasquatch (hint: mushrooms are involved). Again, longtime D fans should notice the second half of the song is similar to the one played with Sasquatch in another of the HBO specials.

More songs follow along with the movie, with "Dude I Totally Miss You" describing the duos time apart. Like "Baby", it's another soulful song but adds a bit of man-crush humor that is a traditional theme in D songs. "Break-In City" and "Car Chase City" are less Tenacious D, more generic rock and roll. Although Jack still works his unique styling into the songs, the music doesn't seem typical of something him and KG would perform in a club.

This all leads into a climactic battle with the Devil in "Beelzeboss", and MAN what a climax it is! JB and Kyle challenge the Devil to a rock-off, and the back-and-forth music and lyrics between the foes turns out to be an awesome rock opera that takes laugh-out-loud humor, hard metal, slow acoustic, and head-banging solos to create by far the best track on the album. Played with a passionate snarl by Dave Grohl (always a contributor to D songs but never quite like this!), the Devil proves to be a worthy adversary to Jack and Kyle, vocally and stylistically. This song provides an idea of what really happened in "Tribute" from their first album. I cannot get enough of this song and would recommend the album for this track alone".( amazon customer)