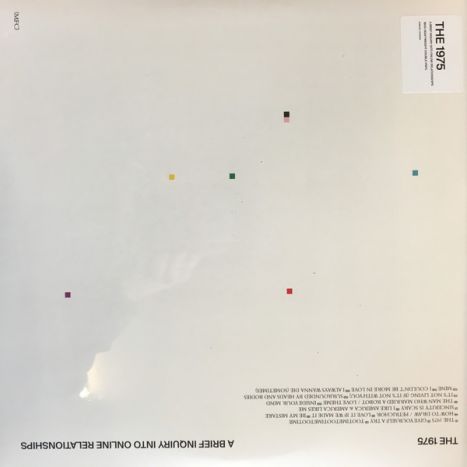 The 1975 ‎– A Brief Inquiry Into Online Relationships

Double gatefold heavyweight vinyl with matte varnish finished inner bags & 12” lyric booklet on black vinyl with album download code. The new 15 track album from The 1975, includes the singles ‘Give Yourself A Try’ & ‘TOOTIMETOOTIMETOOTIME’

"All of these curiosities play out spectacularly on A Brief Inquiry. The album is similar to its predecessor in its boundless sense of style, swerving from Afrobeats to brushed-snare jazz balladry to one track that sounds like a trap remix of a Bon Iver ayahuasca trip. But whereas I like it when you sleep sometimes could be a tick too clever and unwieldy, A Brief Inquiry, produced almost entirely by Healy and drummer George Daniel, is more purposeful. Take that Bon Iver-type freakout, “I Like America & America Likes Me,” where Healy’s voice is transformed into a smear of Auto-Tuned slogans, an adbot on the fritz. But listen closely and his bionic spasms start to sound like the meter readings of a society that’s moving too fast to process anything in a meaningful way. “Am I a liar?!/Will this help me lay down?!” Healy yelps, too harried to stop for answers, too wired to take a nap. It’s impossible to tell exactly where his actual voice ends and where the digitized effects take hold.

When it comes to the 1975’s more widescreen scope—filtering in culture’s ills along with personal ones—the album hits a daunting apex with “Love It If We Made It.” It is the rare Anthem for Our Time that actually gets the job done: This thing holds the mirror up to our collective faces so close you can see your breath on it. As gargantuan drums clear a path before him, Healy mimics the endless scroll, where dead refugees and dead rappers all slide by on the same timeline. He recasts one of the year’s most cursed tweets—“Thank you Kanye, very cool!”—into one of the year’s best lyrics, in turn laying bare Ye’s current fallen status as nothing more than mere flotsam for the churning news cycle. Healy repeats the track’s title for a vaguely optimistic hook, but his gasping delivery tells a different story. The song ends with staccato strings that recall a clock ruthlessly ticking down the seconds.

According to A Brief Inquiry, if there is any sort of solution to our modern apocalyptic predicament, it involves stepping outside, risking a broken heart, and searching for connections beyond the screen. And yet, Healy is the first one to acknowledge that this is harder than ever to do: The album’s only marriage is presented as a cautionary tale, read by Siri, about a troll who falls in love with the internet. “The Man Who Married a Robot” acts as a sly sequel to “Fitter Happier,” Radiohead’s doomsaying, robo-voiced nightmare from OK Computer. It sits atop a bed of treacly piano plinks, like a demented parody of a Facebook commercial that’s desperately trying to get you to log on again. In the end, the troll dies. The internet does not.

The members of the 1975 began playing together in their teens as an emo band, and they are still interested in wringing out unadulterated feeling from everything they touch. This is the thread that grounds even their most dubious dabblings, and makes their dilettantism amount to more than a series of stunts. At first, with its glistening synths and languid tempo, “I Couldn’t Be More in Love” seems like pure ’80s schmaltz, something that Michael Bolton could have cut between yacht rides. But instead of luxuriating in the musical ooze around him, Healy takes the slickness as a challenge and turns in his rawest performance on the entire album. Recorded the day before he entered rehab late last year, his vocals are frayed as he laments the end of a four-year relationship with the panic of a crashing pilot. When he howls, “What about these feelings I’ve got?” it sounds elemental, a refashioning of emo’s core into something jarring and new." ( PItchfork)