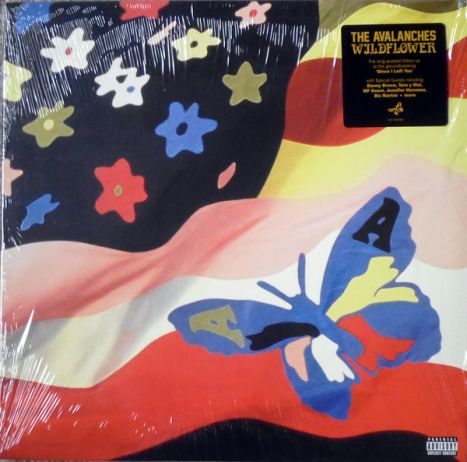 At its best, Wildflower feels like an extension of Since I Left You, hewing close to its predecessor in terms of style, sound, approach, and texture—you would never mistake this for an album by anyone else. The Avalanches make music that’s open, welcoming, soft, gentle; the track construction is virtuosic, but it never wants to show off, and the beat-jacking never feels competitive. In addition to the found sounds, the album has a lot of new instrumentation, most of it presented to mix seamlessly with the samples. Film composer Jean-Michel Bernard adds orchestrations to a handful of tracks, upping the quotient of Disneyfied wonder. The general approach to production is classic Avalanches: AM Gold pop with its sweet strings bleeds into delicate disco with beats inspired by early hip-hop unpinning the whole, imbuing it with a kind of bookish innocence common to the world of indie pop. If the turntable-scratched choruses are gone, replaced by live people at a microphone, the sonic universe they exist in has, thankfully, changed very little.

On the whole, the indie pop songs are more successful than the tracks featuring rappers. “Colours,” the first Jonathan Donahue feature, sounds like a lost classic of psychedelic pop from a forgotten Elephant 6 offshoot, a lysergic mix of backward beats, warbly guitar, and wide-eyed vocals awed by the overpowering beauty of the world. The Toro Y Moi collaboration “If I Was a Folkstar” takes the same tape-stretched, sun-bleached feel and mixes it the kind of bouncy and playful disco beat Bundick has mastered in his own music. Jennifer Herrema usually speaks to us from behind a cloud of weary cynicism, but on “Stepkids” she sounds downright hopeful and maybe even happy, as she gets wistful over “a pack of smokes and a can of spray paint.” David Berman’s spoken-word turn on “Saturday Night Inside Out” sounds like something you might find on the back half of a weird forgotten singer/songwriter record from the ‘70s, which is perfect, and somewhere behind him are backing vocals from Father John Misty. The Avalanches have a knack for bringing all of these disparate voices into their world."