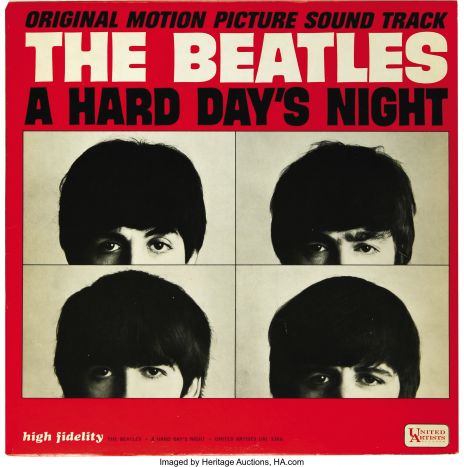 This is the first Canadian pressing with black United Artists labels with black and silver bubbles over the United Artists box logo.
The mono mixes on some tracks are different to those on the regular UK mono album. Also available in stereo (UAS 6366).
Track A3 Erroneously titled ''I Cry Instead''.

Cover is VG+ VG++ has some ring wear (see our pic)

Oddly enough, "Hard Day's Night" is rarely mentioned as one of the Beatles' best albums. What a shame, 13 unforgetable Lennon-McCartney classics. In fact, so cohesive are the tunes, that one could make a strong case for "A Hard Day's Night" as rock-n-roll's first true concept album. Lyrically, each song deals with love. Yes, it's mostly simplistic, however, a growing sophistication sneaks in on "Things We Said Today" and the haunting finale "I'll Be Back".


The instrumental landscape is graced with driving acoustic guitars, Ringo's steady backbeat and of course, George's ringing 12-string guitar. So influential was George's playing -- especially on the classic title song -- that seemingly an entire generation of young guitar slingers made the 12-string a part of their arsenal. (The Byrds' Roger McGuinn credits "Hard Day's Night" as the inspiration for his love affair with the 12-string.)