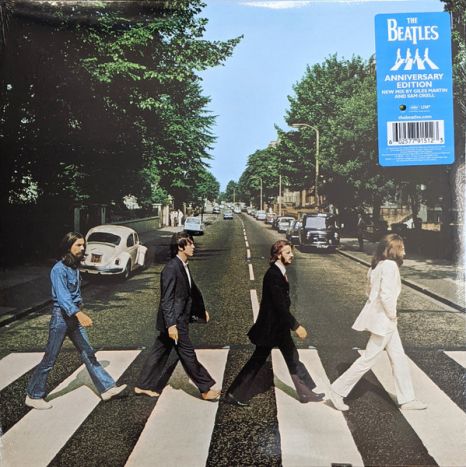 Skip to the beginning of the images gallery
Details
The Beatles – Abbey Road
Label:      Apple Records – B0030719-01, Capitol Records – B0030719-01, UMe – B0030719-01
Format:
Vinyl, LP, Album, Reissue, Remastered, Stereo, Remix, 50th Anniversary Edition, 180 Gram
Country:    USA & Canada
Released:   2021
Genre:      Rock
Style: Psychedelic Rock, Pop Rock, Classic Rock
Originally Released: 1969New mix by Giles Martin and Sam OKell.
"Made in Canada" sticker on bottom right corner (on shrink wrap)
Runouts stamped, except MILES. ABBEY ROAD 1/2 SPEED. ROOM 30. is etched.
Barcode (Scanned on sticker): 602577915123The album has been re-mastered by a dedicated team of engineers at EMI's Abbey Road Studios in London over a four year period utilising state of the art recording technology alongside vintage studio equipment, carefully maintaining the authenticity and integrity of the original analogue recordings. The result of this painstaking process is the highest fidelity the catalogue has seen since its original releaseTracklisting:A1 Come TogetherA2 SomethingA3 Maxwell's Silver HammerA4 Oh! DarlingA5 Octopus's GardenA6 I Want You (She's So Heavy)B1 Here Comes The SunB2 BecauseB3 You Never Give Me Your MoneyB4 Sun KingB5 Mean Mr. MustardB6 Polythene PamB7 She Came In Through The Bathroom WindowB8 Golden SlumbersB9 Carry That WeightB10 The EndB11 Her Majesty"I only can echo the majority. This is simply another masterpiece from the greatest band that ever cut a record. These four were in a class by themselves. The Beatles and then there were all the others. Abbey Road blew everyone away when it came out and still is an experience and not just a set of songs put together for listening to while you run the vacuum cleaner. I always think of some of the assertions that have been made about Shakespeare when I take in the entire cat log of the Beatles. It seems impossible that one small rock combo could come together and create art the way they did the same way that so many people can't imagine one person writing as many classics as Shakespeare did. During the time of the Beatles, it was one set of songs after another, album after album of music that cut a new path a little deeper each time. Abbey Road was like a non-stop freight train and a must for anybody that can grasp the significance of this time period and the effect of this music on what was happening."
More Information
Please sign in with your email address or Create an Account.
New Products
Compare Products
Compare
Clear All
You have no items to compare.
My Wish List
Last Added Items
Go to Wish List
You have no items in your wish list.
Vinyl Records Vancouver
Categories
Help
Quick Link
Newsletter