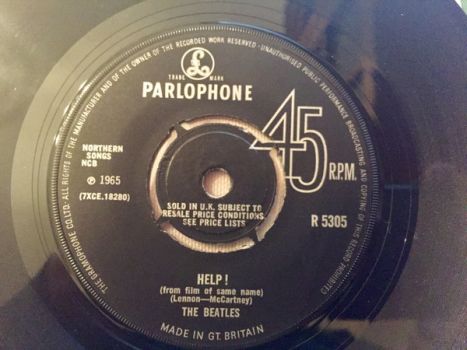 THE GRAMOPHONE CO. LTD. before ALL RIGHTS... round text on label

Help! is a song by The Beatles, written primarily by John Lennon though Paul McCartney reports that he had a hand in writing the song as well, being called in "to complete it" in a two-hour writing session on 4 April 1965. The song is featured in the film Help! and is on the album of the same name.

The song was another worldwide smash and the Beatles featured "Help!" during their summer 1965 and 1966 concert tours.

I'm Down is a blues song by The Beatles. It was written by Paul McCartney, and credited to Lennon/McCartney and first released as the B-Side to Help! in 1965. It has been covered several times, most notably by Aerosmith. The song is a tribute to 1950s music, and is seen by many as a rewrite of Little Richard's "Long Tall Sally," one of The Beatles' favourite cover songs