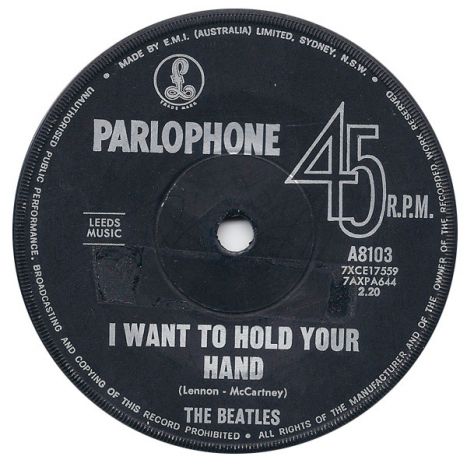 The Beatles ‎– I Want To Hold Your Hand / This Boy

This variation can be identified by:
Side A label - "I Want To Hold Your" on line 1 & "Hand" on line 2;
Leeds Music publisher credits/loyalty stamps on both sides
"Lennon - McCartney" written by credits as apposed to "Lennon-McCartney"

"I Want to Hold Your Hand" is a song by the English rock band The Beatles. Written by John Lennon and Paul McCartney, and recorded in October 1963, it was the first Beatles record to be made using four-track equipment.

When the group toured Australia in June, the population afforded the visit the status of a national event.  A crowd of 250,000 welcomed the Beatles to Melbourne; this figure was the largest recorded gathering of Australians in one place] and twice the number of people that had greeted Queen Elizabeth II on her royal visit in 1963

The Beatles' chart domination was repeated in countries around the world during 1964, as were the familiar displays of mania wherever the band played.

"I Want to Hold Your Hand" was the band's first number-one hit on the Billboard Hot 100 chart, starting the British Invasion of the United States music charts. The song entered the chart on 18 January 1964 at number 45; it later held the number one spot for seven weeks, and ended up charting for 15 weeks. It also held the top spot in the United Kingdom charts. A million copies of the single had already been ordered on its release. "I Want to Hold Your Hand" became the Beatles' best-selling single worldwide.

On 29 November 1963, Parlophone Records released "I Want to Hold Your Hand" in the United Kingdom, with "This Boy" joining it on the single's B-side. Demand had been building for quite a while, as evidenced by the one million advance orders for the single. When it was finally released, the response was phenomenal. A week after it entered the British charts, on 14 December 1963, it knocked "She Loves You", another Beatles song, off the top spot, the first such instance of the same act taking over from itself at number one in British history, clinging to the top spot for five full weeks. It stayed in the charts for another fifteen weeks afterwards, and incredibly made a one-week return to the charts on 16 May 1964. Beatlemania was peaking at that time; during the same period, the Beatles set a record by occupying the top two positions on both the album and single charts in the United Kingdom