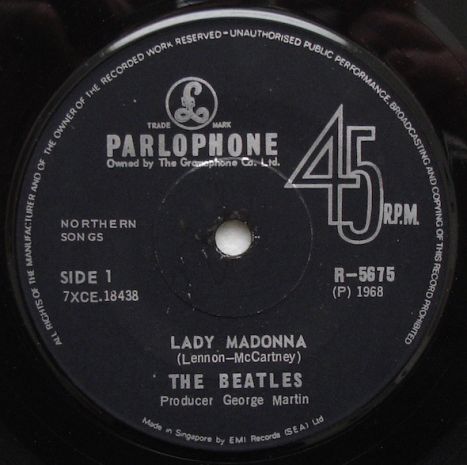 B The Inner Light

Lady Madonna was recorded on February 3rd and 6th, 1968. the first single by The Beatles that went back to basic rock n' roll. It was too a song that defied expectations. Released on the heels of Sgt. Pepper's Lonely Hearts Club Band and Magical Mystery Tour, .

The melody (piano intro) was taken from Humphrey Lyttelton's 50s British jazz classic titled"Bad Penny Blues," together with the rock n' roll horn section, made the perfect marriage for this song at a time when 50s rock was making its reappearance. It should be noted that "Bad Penny Blues," was also produced by Sir George Martin.

"The Inner Light" is a song by the English rock group the Beatles, written by George Harrison. It was released on a non-album single in March 1968, as the B-side to "Lady Madonna". The song was the first Harrison composition to be issued on a Beatles single and reflects the band's embrace of Transcendental Meditation, which they were studying in India under Maharishi Mahesh Yogi at the time of the single's release. After "Love You To" and "Within You Without You", it was the last of Harrison's three songs from the Beatles era that demonstrate an overt Indian classical influence and are styled as Indian pieces. The lyrics are a rendering of a poem from the Taoist Tao Te Ching, which he set to music on the recommendation of Juan Mascaró, a Sanskrit scholar who had translated the passage in his 1958 book Lamps of Fire.

Harrison recorded the instrumental track for "The Inner Light" in Bombay in January 1968, during the sessions for his Wonderwall Music soundtrack album. It is the only Beatles studio recording to be made outside Europe and introduced Indian instruments such as sarod, shehnai and pakhavaj to the band's sound. The musicians on the track include Aashish Khan, Hanuman Jadev and Hariprasad Chaurasia. Aside from Harrison's lead vocal, recorded in London, the Beatles' only contribution came in the form of group backing vocals over the song's final line. In the decade following its release, the song became a comparative rarity among the band's recordings;