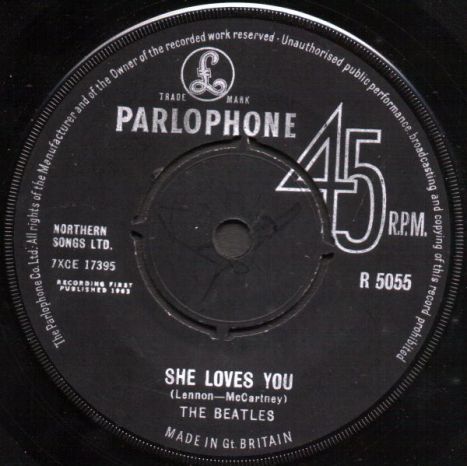 The Beatles ‎– She Loves You

A She Loves You

B I'll Get You

Rim text in mixed case: "The Parlophone Co. ...."
PKT or KT tax code either on side A or side B 4-prong centre or no such tax code at all

"She Loves You" is a song written by John Lennon and Paul McCartney and recorded by English rock group the Beatles for release as a single in 1963. The single set and surpassed several sales records in the United Kingdom charts, and set a record in the United States as one of the five Beatles songs that held the top five positions in the charts simultaneously, on 4 April 1964. It is their best-selling single and the best selling single of the 1960s in the United Kingdom.

In November 2004, Rolling Stone ranked "She Loves You" number 64 on their list of the 500 Greatest Songs of All Time.  In August 2009, at the end of its "Beatles Weekend", BBC Radio 2 announced that "She Loves You" was the Beatles' all-time best-selling single in the UK based on information compiled by The Official Charts Company.