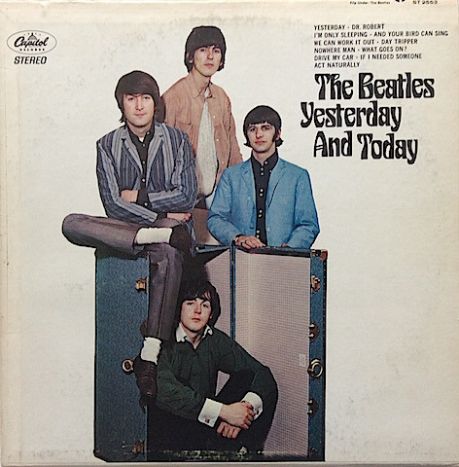 The Beatles ‎– Yesterday And Today

Printed on labels:
(Recorded in England)
Stereophonic
Manufactured in Canada by Capitol Records-EMI Of Canada Limited

Capitol Records was celebrating an unbelievable success when they acquired The Beatles. They released albums and singles that changed the course of music forever. So, it came as quite a shock to everybody when the album "Yesterday And Today" was released in June 1966. For the very first time, The Beatles' own decision as to their choice for an album cover was universally criticized. The first issue album cover featured an unusual photo of the group dressed in butcher smocks, holding chunks of meat and decapitated baby dolls, with a bit of a smirk on their faces. This cover was quite controversial for its time. Outcry was so negative that Capitol was forced to change the cover image, this time to a picture of the group surrounding a steamer trunk, this time looking rather bored with the whole thing. This album has had at least 7 different cover variations (6 with the trunk alone!). The 11 songs featured were from the "Rubber Soul"/"Revolver" era. Like so many of the other albums by The Beatles during the 60s, this one went straight up to Number One! Containing one great song after another (including 2 number one hits!), "Yesterday And Today" is the very best released Beatles album from the 1960s.