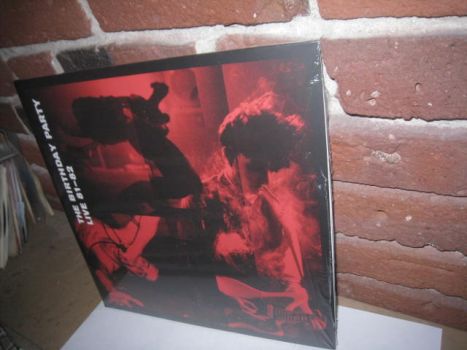 
Though various live releases emerged over the course of the band's existence, no full-length capturing of The Birthday Party was approved by the band themselves until Live 81-82 was first released back in 1999, nearly 20 years on from when the recordings took place.

An essential record, Live 81-82 stiches together tracks from a London date in 1981, a German show in Bremen in 1982 and a ringer cut from a show in Athens, Greece (a version of the Stooges' 'Funhouse' with Jim Thirwell aka. Foetus on sax).

Until now Live 81-82 has never been pressed on vinyl. Finally coming out on July 29th, Live 81-82 is being made available on double vinyl with a gatefold sleeve and a CD inside. The tracklisting is the same as the original release.


Few bands were as cataclysmic, chaotic, and iconoclastic as Australia's Birthday Party. And while they spawned a few imitators (most notably Bogshead, Scratch Acid, and the short-lived "batcave" movement), their fractured sound and aura of wickedness were so far removed from the norm of early-'80s rock music that no group even came close to duplicating their murderous persona and manic, driving racket.


Live 1981-82 collects 17 tracks from concerts in London, Germany, and Greece, and for a band whose music seemed to cling to sanity by the most delicate of threads, these recordings are surprisingly coherent and faithful to the album versions.

Taking into account the barrage of feedback, the pile-driving bass, and singer Nick Cave's howling, the sound is also quite good (the only exception being the single cut from Greece, a cover of the Stooges "Funhouse"). As for the performances, the band is in excellent form. Cave delivers the songs with conviction and energy, punctuating them with his startling vocabulary of shiver-inducing screams, grunts, snorts, groans, and growls.


Considering the schizophrenia that was so much a part of the band's music, Cave's ability to convincingly deliver his gut-wrenching angst is nothing short of remarkable.

While Cave's Manson-meets-Morrison persona drew most of the attention, it was the Birthday Party's ability to swing--hard--that put them over the top. Drummer Phil Calvert is a beacon in the sea of chaos as guitarists Mick Harvey and Roland S. Howard disembowel their guitars, blasting shards of jazz and blues across the horizon.

The late bassist Tracy Pew is the real revelation. Rock solid and never missing a beat, Pew emerges as the constant amidst the wreckage, providing the rich base from which these bad seeds sprung. Live 1981-81 is a near-perfect document of one of rock's most extreme, creative, and dangerous forces.


All my Birthday Party LPs have sat gathering dust for over a decade, but the sight of this in the racks fired off neurons in the dusty corners of my brain. What an absolute moster of a band. For a while there nobody could touch them. I saw them in DC in 82, and this brought it all back. Now THIS is alternative, not Pearl Jam butchering some oldie that was lousy to begin with. Nick flagellates himself while the guitars test the limits of electricity, and the bass and drums thunder in unison, just barely holding the whole thing together... each song an emotional catharsis, wailing and shrieking until it lurches to a stop and twenty people clap.

You don't dance to this music, you quiver and throb to it. So here's one to send all you Nine Inch Nails and Marilyn Manson fans running back to mommy... Once upon a time there was a band called The Birthday Party, and they ruled the Kingdom far and wide...

Someone once said that you could tell the smart people at a Birthday Party concert, because they were the ones standing at the back. There were two advantages to being toward the back of the crowd at a BP performance - for one, you were less likely to sacrifice an eardrum to the squealing amps being pumped full of Rowland S. Howard's unique style of guitar playing. The other, more obvious advantage was that you were far less likely to get kicked in the face or hit on the head by Nick Cave.

The Birthday Party represent a style of music much missed in today's society. I'm not speaking so much of their genre, which is still present in this day and age (but is nowhere near as good), but rather the fact that their music was largely written for stage before studio, rather than the other way around. I bought "Hits" as my first taste of the BP a few months ago, and was impressed. The songs were intense. But then I got this, and realised that the studio recordings, despite Tony Cohen's best efforts, paled next to the work the BP did on stage.

The entire album is recorded in the wake of "Junkyard", and the classic hit (much to Nick Cave's endless puzzlement and frustration) "Release the Bats". It contains material ranging from 1979's "Hee-Haw" through to "Junkyard", including a few tracks which never made it to the studio. The quality varies - the London material is brilliant, but the Bremen concert has been quite noticably sourced from cassette. The Athens track is the worst quality, and I'm pretty sure it and the Bremen material are bootlegs which the band have bought. None of it's unlistenable, however, provided that you have a taste for the Birthday Party's style of music.

his is a brilliant version, so crunched and raw. Brilliant band