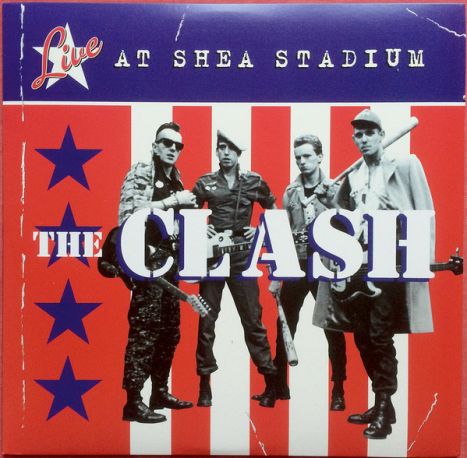 "Foreshadowing the BBC Radio Global a Go-Go broadcasts that would define his later career, Strummer sounds happiest playing cruise-leader to his band's genre tourism, talking the audience through a live mash-up of Sandinista's rap-rock prototype "The Magnificent Seven" and Willie Williams' reggae standard "Armagideon Time" like he was holding a bus megaphone: "This is a black New York rhythm we stole one night...so while we're here doing our little thing, I'm gonna take you to Jamaica...so hold on, fasten your seatbelts, extinguish all reefers!"

But while Strummer's stage banter frequently highlights the seeming absurdity of the Clash playing a venue the size of Shea, the set list more than justifies their promotion to it, adhering as it does to the time-honoured stadium-rock tradition of playing the hits and playing them often; even the band's current release at the time, Combat Rock, is represented only by its two popular singles (which means there's no "Straight to Hell" to lure in newly arrived "Paper Planes" chasers). Highlighting the staggering procession of classic singles the band had amassed in just five short years, the incredibly well-preserved (or greatly refurbished) Live at Shea Stadium recordings make the contradictory concept of stadium-punk seem like a natural state: if anything, the lock-and-load riffs of "Tommy Gun" and the shout-and-response reworking of Eddy Grant's "Police on My Back" sound like they were originally designed with the bleachers in mind.

Live at Shea Stadium, however, also provides a glimpse into the existential quandaries that would afflict agit-punk progeny from Rage Against the Machine to Against Me! onward: that is, the inherent difficulty of reconciling your activist politics with your growing bank balance. As the lone Clash original featured from their 1977 debut, "Career Opportunities" seems like a particularly odd choice to play at Shea

In a cunning premonition of their own impending collapse, the Clash bid Shea Stadium adieu with their signature cover of the Bobby Fuller Four's "I Fought the Law", the ultimate fight song for those who got no more left in them. The Clash may have showed up at Shea to inherit the Who's torch and create a new model of the thinking person's rock star for the 1980s, but they ultimately flubbed the hand-off-- and a group of Irishmen were more than happy to swoop in from the sidelines and run away with it." ( pitchfork)