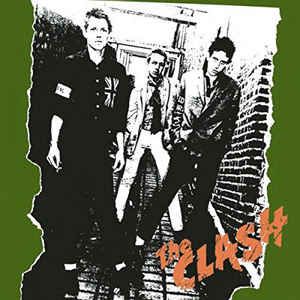 
The Clash stands as one of the cornerstones of any punk rock collection regardless of which version you own. It deserves its place alongside Nevermind the Bollocks, The Stooges and The Ramones as a defining moment in music history.

one of the most powerful albums you will ever encounter. This album was absolutely shocking when it came out. Punk bands were supposed to be crude, inept on their instruments, undisciplined, and lacking in any political vision except unfocused anarchism. The Clash was the punk antithesis to punk. They weren't calling for anarchy; they were calling for a revolution. They were politically outraged, but they were outraged in behalf of people who were actively suffering at the hands of society. And they were clever! "Career Opportunities" was about Mick Jones brief job opening mail for the prime minister in case any were letter bombs. And unlike other punk bands, they expressed a solidarity with the racially oppressed, with incredible songs like "Police and Thieves." Musically, they were far out in front of all other punk bands, playing tight, disciplined, and incredibly exhilarating songs. They were the first punk band that could be favorably compared with any other band in rock history. And unlike other bands, lead guitarist Mick Jones could actually play solos


The Clash - Police and Thieves

And we've got the memory of The Clash. And the music will live on forever


The Clash - I'm So Bored With The USA & London's Burning

wow...amazing...joe has so much passion...mick is a genius...paul has rhythm..and topper is a machine...they were all great at what they did which really did make them the only band that mattered. R.I.P Joe Strummer.

"Career Opportunities" is a song by The Clash, recorded for their debut studio album, The Clash in 1977. Another version was featured on the group's fourth studio album Sandanista! (1980) where Mickey Gallagher's two sons, Luke and Ben, sing the song.

The song attacks the political and economic situation in England, citing the lack of jobs available, particularly to youth, and the dreariness and lack of appeal of those that were available. They specifically mention service in the military and police forces in addition to jobs that are often perceived as being 'menial' such as a bus driver or ticket inspector, as well as "making tea at the BBC".

The line "I won't open letter bombs for you" is a reference to a former job of Clash guitarist Mick Jones, opening letters for a British government department to make sure they weren't rigged with mailbombs. The song was named by bassist Paul Simonon.


Clash - I Fought The Law