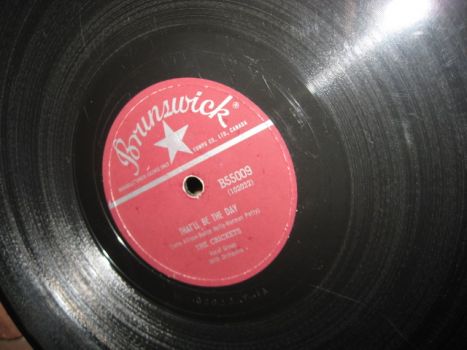 Record is Brunswick label No B55009
Canada Issue

POSTAGE IS EXTRA FOR ADDITIONAL PACKING


Holly and the Crickets became the blueprint for self-contained groups--writing and recording their own music. With his trademark "hiccup" vocal style and impeccable guitar leads, Holly recorded numerous rock classics: "That'll Be the Day," "Peggy Sue," "Well...All Right," "Think It Over." But his album tracks are just as good:

"Words of Love" (lovingly covered by the Beatles),


Most fans know that a couple of months before his tragic and untimely death, Holly recorded a practise tape in his apartment, which was later found and the songs were dubbed and released as singles in the 1960s. What some people don't realize is that Norman Petty (Holly's ex-manager) did is own versions of these songs which, in my opinion, were much nearer to how the songs would have ended up had Buddy Holly lived to record them himself.
More Information
Please sign in with your email address or Create an Account.
New Products
Compare Products
Compare
Clear All
You have no items to compare.
My Wish List
Last Added Items
Go to Wish List
You have no items in your wish list.
Vinyl Records Vancouver
Categories
Help
Quick Link
Newsletter