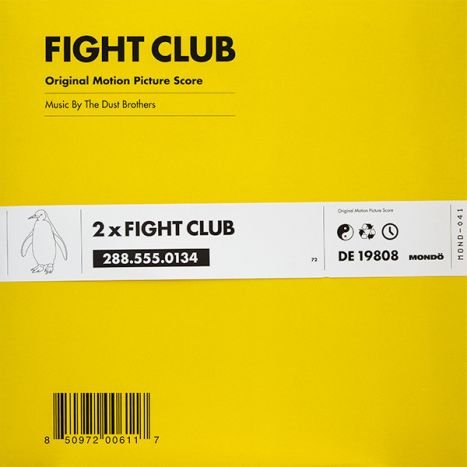 The release comes in a yellow cardboard package with an IKEA-themed jacket (with touches like “Mondö” and pull-out assembly instructions), a nod to Edward Norton’s character’s obsession with keeping the appearance of being a normal, successful adult. It also features his spirit animal, the penguin. To open the sleeve, a strip of paper with the penguin needs to be removed and the "sacrifice" arrow torn apart, thus separating it in two pieces and destroying it for good. It contains printed inner sleeves and splattered "pink soap" vinyl.

Sleeve can be opened in two variants!

Timing is not given on sleeve nor label for D4.

When the song titles are read top to bottom, left to right, "un-bolded" letters spell out the "WHere iS My Mind"

The Dust Brothers are best known as the production duo that everyone from the Beastie Boys to Beck and White Zombie have turned to for help behind the mixing board (and to great results). With the soundtrack to Fight Club (the movie based on the Chuck Palahniuk novel), we finally get a glimpse of one of the duo's original creations. Filled with dark techno and sparse industrial passages, it's a bleak though interesting listen. Sinister funk gives way to medieval chants on "Homework," but the bulk of this 2LP set is all about samples and synths. Don't expect to find the quirks of Paul's Boutique or Odelay here, but in terms of good movie mood music, the Dust Brothers have done it again. --Jason Verlinde