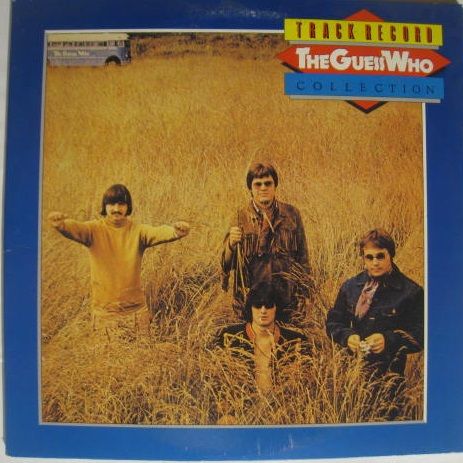 " They had their biggest hit "AMERICAN WOMAN", an overplayed song at the time, but their only number 1 hit. And "NO TIME", which I liked even better, that reached number 5. I still enjoy listening to these songs from early on in their career, but it's their later stuff that I like even more. Randy Bachman and Burton Cummings made for a very forminable songwriting team. But with their immense talents, they were always buttin' heads over the direction the band should take. Bachman finally got fed up and quit the band in 1970 to form Bachman Turner Overdrive.

"Beginning in 1969, with Burton Cummings (vocals) and Randy Bachman (lead guitar) writing most of the material, the Guess Who had a string of memorable singles over the next three years, including 3 million-sellers: "These Eyes," "Laughing" and "American Woman."
.. from the stronger early albums. Wheatfield Soul is represented by only the single "These Eyes." Arguable their best album, Canned Wheat, features only the three singles extracted from the album: "Laughing," "Undone" and "No Time." Fortunately Share the Land, in addition to the hits, is also represented by the equally strong "Bus Rider," "Do You Miss Me Darlin'" and "Hang on to Your Life."

. Cummings and company proceeded to put out a string of early 70's hits with the songs "SHARE THE LAND", "HAND ME DOWN WORLD", and "BUS RIDER". All from their overall best album "Share The Land". They also had a hit that came along a few years later with "CLAP FOR THE WOLFMAN". I think the music the Guess Who did the last year or two before their breakup is underrated. Their later album from 1972 "Artificial Paradise" was a very nice record that included the songs here: "FOLLOW YOUR DAUGHTER HOME", a very cool flute driven song.

The country flavored "ORLY" and "THOSE SHOW BIZ SHOES", which featured some nice singing and great piano work by Cummings. This was a very different Guess Who record that got a lot of 8-track play at the time. Also included here is the catchy b-side song "LIFE IN THE BLOODSTREAM", which has a distinct 50's flavor to it. They also have an unreleased song "SONA SONA", which has a nice west coast rock feel. Another outstanding cut here is "ALBERT FLASHER", which used to be my favorite song to shoot pool to. It's also a great song to try to sing to, if you can. It's a fast one. "Track Record" is a very satisfying best of collection. If your a rabid Guess Who fan, ( amazon customer)