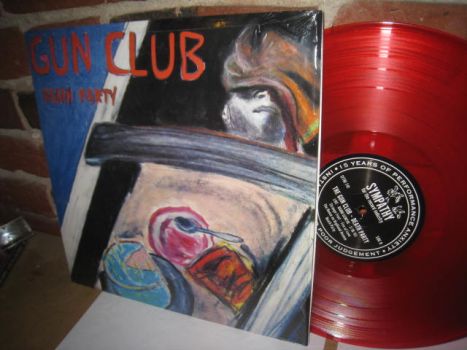 
A1 The House On Highland Avenue
A2 The Lie
Bass  Jeffrey Lee Pierce
A3 The Light Of The World
A4 Death Party
A5 Come Back Jim
Live: Radio Geneva: March 1983

Presented for the first time ever on LP, the DEATH PARTY EP has long been the holy grail for fans of The Gun Club. Although a poorly recorded semi-bootleg live album was issued years ago deceivingly sporting the same title, this Sympathy For The Record Industry release is (finally!) the real thing.

Quickly recorded and released following MIAMI, The Gun Club's second album, the five songs on DEATH PARTY are remarkably consistent with that underrated work, despite the fact that Jeffrey Lee Pierce utilized a completely different and short-lived band lineup for the EP. All the tracks here are powerful, grim tales of despair, drug addiction, deviant sex, and death.

Fans seem to agree that the band this time around consisted of strictly routine musicians but if that's truly the case than the superb songwriting balances everything out. "The Lie" and "The House On Highland Ave" are two of Pierce's most searing rockers, and the title track is white-hot, scruffy and hypnotically repetitious.

The LP is augmented by seven live tracks taken from France's RADIO GENEVA program, including versions of three DEATH PARTY songs (most notably "Death Party" itself) and a totally raucous "Fire of Love".

The Gun Club - The Lie

THE GUN CLUB - FIRE OF LOVE