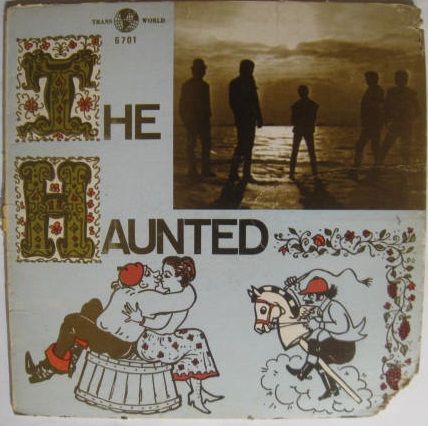 Record is VG+ has wear (listen to our copy)

Cover is VG+ has ringwear, major edgewear on both edges, 2 inches of damage on spine, cover is split 2 inche on top edge and 4 inches on bottom edge and bottom right corner is cut 2 inches (see our pic)

B1 Out Of Time

In 1965, Jurgen Peter joined up with Bob Burgess (vocals), Al Birmingham (lead guitar), Glenn Holmes (bass), and Peter Symes (drums) to form The Haunted. Besides Peter, the other constant band member through most of its six-year history was Birmingham. The band membership that recorded the band's best known song, "1-2-5" was composed of Birmingham (lead guitar), Peter (rhythm guitar), Burgess (vocals), Mason Shea (bass) and Dave Wynne (drums).
The band's first big break came after winning a Battle Of The Bands at the Montreal Forum in 1965, beating such competitors as David Clayton-Thomas and the Shays. The first prize was studio time, bankrolled by Quality Records, that they used to record the two songs on their first single, "1-2-5", with "Eight O'Clock This Morning" as the B-side. The execs at Quality Records were enthusiastic about "1-2-5" but objected to the original lyrics, so a "clean" version with different lyrics was also recorded. The single (with the alternate "clean" lyrics) was released on Quality in early 1966. The first pressing of this record had the band name misprinted as "The Hunted." Ironically, the later pressings with the band's name correctly spelled, are now more difficult to locate.
The single achieved substantial local success, then broke nationally, making the Canadian version of the national charts (RPM Weekly Magazine.) The song gained enough attention in the US to attract a US release of the single on the Amy record label, who released the original "uncensored" version.

The band grew to be one of the most in demand bands in Canada for the balance of the 1960s and into the early 1970s. Peter decided to fold the band in 1971, commenting as follows: "We were the most sought after and highest paid Canadian band for many years. When I folded the band in 1971, I had to cancel a whole year of advance bookings and it cost me a fortune in lawyer's fees to get out of some of them." At the time of the breakup, the band had a loyal fan club with thousands of members.