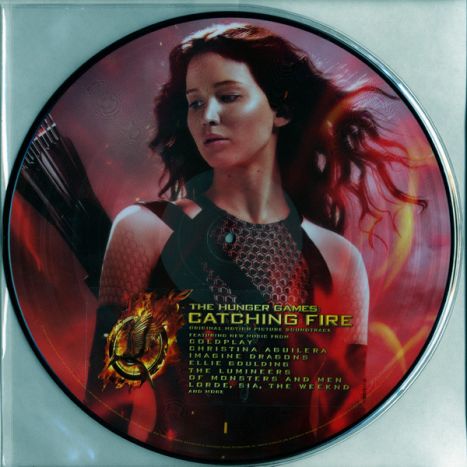 
Like any decent movie soundtrack or 'Music From and Inspired By...' as they're often called nowadays, the songs included reflect the movie's themes either in lyrical content, tone, title or all three. And like all soundtracks only two or three songs will actually appear in the movie, probably during the credits. Yet despite the appearance of the bigger name acts, these soundtracks pretty much serve as vehicles for lesser knowns/up-n-comers to gain exposure, which is fine. This one's also a departure from the first which was strongly rooted in Depression Era traditional folk songs and is more modern, more electronic and yet more desperate and hopeful, as befits the shift in tone for the franchise.

Atlas by Coldplay- typically Coldplay, but the ticking clock theme represented by the piano and underneath effects are what deliver the message home.

Silhouettes by Of Monsters and Men- lead singer Nanna Hilmarsdottir voice is strongly similar to Regina Spektor's, which is a very good thing here. Kick drums and bassline are the strength behind this one.

Elastic Heart by Sia (feat. The Weeknd and Diplo)- kind of all over the place, starting with the constantly looped refrain "I don't care" underneath the entire song. Second verse is done by Weeknd, and towards the end it just gets noisy with everything going on all at once.

Lean/Dying Is Easy by The National- opening strains are reminiscent of U2's All I Want Is You. Early on this one seems a good fit the film.


Devil May Cry by The Weeknd- might be the best song on the record in reference to the film. Especially liking the thundering drumbeat and forlorn guitar/synth combo which are very evocative and apropos. The lyrics are spot on.

Everybody Wants To Rule the World by Lorde- a goth/industrial romp over the eighties classic that's pitch perfect for the film.

Gale Song by The Lumineers- our first return to the Appalachian Depression Era-stylings of the first soundtrack which are popular nowadays.

Mirror by Ellie Goulding- the eerie piano notes also brings a sense of time running out as well as that of being haunted by personal demons. Switches to a more modern synth-base and pulse beat, lyric about being `the girl who was on fire'.

The soundtrack flows with the theme of The Hunger Games quite well, excellent choices that go along with the movie. Alexandra Patsavas knows how to pull together a good soundtrack.

The lyrics & arrangements evoke characters and feelings of Katniss, Peeta, Gale & Snow from Coldplay's Atlas, (melancholy tone) "carry your world", to Sia's Elastic Heart "you did not break me... I'm still fighting for peace", The Weeknd's Devil May Cry, "faces in the crowd, will smile again, and the devil may cry by the end of the night...". Antony & The Johnsons evoke the sadness of Katniss while Ellie Goulding sings "I was the girl who was on fire". Lorde does a terrific cover of Everybody Wants to Rule the World, providing a different point of view of the songs lyrics through her vocal arrangement. Shooting Arrows at the Sky by Santigold just fits. All the songs are good. The National, Of Mice and Men, Imagine Dragons, The Lumineers... all good.