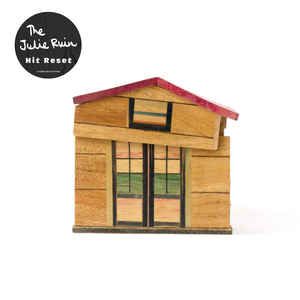 B1 Mr. So And So
B2 Record Breaker
B3 Hello Trust No One
B4 I'm Done
B5 Roses More Than Water
B6 Time Is Up
B7 Calverton

Recorded and Mixed at Figure 8.

"Three years later, Hanna is now fully recovered from her illness, and the Julie Ruin’s second album, Hit Reset, is her most commanding release since her manifesto-writing days. It’s a clean slate. Not a steady accumulation of baggage, but the chance to tip her experiences onto a sterile surface and assess each memory’s impact before dropkicking it into oblivion; the kind of process that’s often only possible when you’ve looked death in the face. It’s Hanna’s most personal work, interrogating the demands that have been placed on her her whole life: during life under duress as a kid in an abusive home. As the uneasy de facto spokeswoman for an anti-hierarchical scene. As the feminist trailblazer whose scholarship and trauma are perceived as a free resource and commodity, even more so now than when she sang “Starfish” 23 years ago. On Hit Reset, Hanna says no like only Kathleen Hanna can say no. Hit Reset is bookended with songs about Hanna’s parents, one as chilling as the other is poignant. In the first three lines of the opener and title track, she distills her abusive father’s disregard for life and nurturing. From that alone, you could understand how she became a feminist insurrectionist, but none of it would have been possible without her mother, to whom she pays tribute in final song “Calverton.” Named for the Maryland town where she grew up, it’s a ballad where Hanna sings endearingly off-key against ornate piano. On “Be Nice,” she wails through distortion about the kind of guy who demands that you accept his aggressions with a smile as he calls you a bitch for refusing to satiate his grim desires, her hissing delivery and the band’s monochrome clatter evoking Grimesfronting Wolf Eyes. “Mr. So and So” is its opposite in sound: a tart sing-song against serrated guitar that could have fit Sleater-Kinney'sNo Cities to Love, where Hanna clowns the “male feminists” who mistake entitlement for enlightenment, damning female artists with faint praise. She and Kenny Mellman howl on the brilliantly ridiculous “Planet You,” which jolts on handclaps and new wave zaps. On B-52’s rager “Hello Trust No One,” Hanna ditches a frenemy, simultaneously celebrating herself and mocking expectations of feminist musicians. “I’m Done” falls towards the end of Hit Reset, where Hanna rejects the demands that have weighed her down all her life, and claims what’s rightfully hers." (Pitchfork)