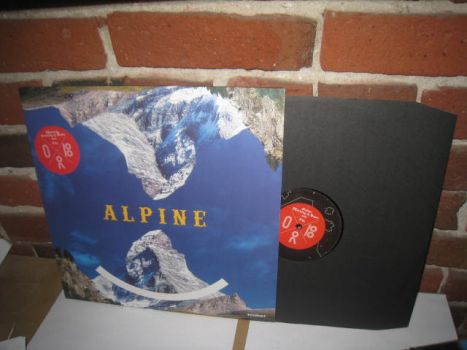 Blessedly, ambient/dub house pioneers the Orb are always, well, the Orb. Last years return to Kompakt with Moonbuilding 2703 AD ably showed they hadnt lost a step, and now we get this 12 expansion of the fine Alpine Dawn, their contribution to this years Pop Ambient compilation. As you might expect from that placement, the track is a little more retiring than the often wonderfully squelchy, bassy album that preceded it; here Alex Paterson and Thomas Fehlmann have done a fine job evoking the sensations conjured up by the title, a brisk wind, clear air, the brightness of the dawn, and maybe, in that warm closing drone, a place to shelter from the cold.

Interestingly enough, given the connotations of dawn, on Alpine that track comes last. Preceded by an Alpine Morning and then an Alpine Evening, it becomes a renewal rather than a fresh start, a change to reset from the night before (or maybe even just to end it softly, depending on how long the night went). Fittingly enough, Alpine Morning with its quasi-yodelling vocal samples, twinkling loop and steady build, shares some obvious DNA with the dawn to come but works as more than just a reflection.

It also leads smoothly into Alpine Evening, which begins with several elements from the earlier track before starting up a much more prominent beat and forging forth in dubby, stompy bliss. Tonally the middle of Alpine is a very different beast than the tracks around it, but such are the Orbs long-practiced skill with musical travelogues that the three do indeed fit together well and feel like part of the same journey (and not just because of some shared sounds). The rhythm of the release winds up being something many of us would recognize from our daily lives; The forthright progression of our days, the wilder joys of our nights, and the gentle aftermath of the next morning. As with everything the Orb touches (or pulsates towards) theres a sense of playfulness and joy here, too; its enough to make one long for the mountains.
More Information
Please sign in with your email address or Create an Account.
New Products
Compare Products
Compare
Clear All
You have no items to compare.
My Wish List
Last Added Items
Go to Wish List
You have no items in your wish list.
Vinyl Records Vancouver
Categories
Help
Quick Link
Newsletter