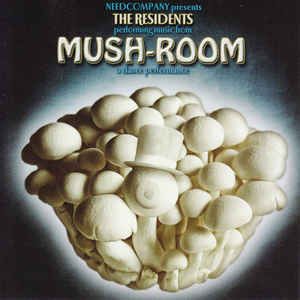 
Though clearly not the only path, a common direction for a recording artist to follow is this: record and release accessible works, and then  as a loyal fan base is established  develop more challenging, esoteric works. The thinking is that the fans will follow.

But theres never been anything conventional about The Residents, so  to the degree one can expect anything from them  they can be relied upon to chart their own journey. And so they have: while Meet the Residents was near about as inaccessible, amelodic a debut as has ever been committed to recording medium, over the groups multi-decade career, they have (again with exceptions) moved in a more accessible direction.

Or maybe music in general has simply caught up with them. On their latest, Mush-room, The Residents display a melodic, cinematic quality that has been a hallmark of some of their work since around the time of The River of Crime (2006) and even earlier. Developed as the soundtrack for a dance performance by Grace Ellen Barkey & Needcompany, the eleven-track Mush-room draws upon sounds and textures from Angelo Badalamenti and others. But the album is decidedly, er, Residential in its foreboding, otherworldly tone.

Yes, the music  largely instrumental  is dreamy. But only if ones dreams are more like nightmares. Mush-room sounds and feels like the impressionistic soundtrack to a deeply disturbing dream. Unlike early Residents albums, the instrumentation is relatively straightforward: many synthesizers are employed, to be sure, but more traditional and acoustic instruments figure into the mix. An early 80s-sounding synth melody forms the basis of the central part of Musical Chairs in ¾, and the ghostly percussion and string backing is adorned by some slowed-down singing that is, of course, creepy and unsettling.

Sticks and Logs employs an almost pop-classical approach: a yearning violin is accompanied by a lovely  and quite melodic  backing of synths and a relatively straightforward beat. Some stabs of brass add that doomy quality which is so often an ingredient of Residents compositions. Like many of the tracks on Mush-room, its an essentially accessible tune with elements thrown in to keep the listener off-center.

Dung Beetles at Work employs skittering sequences, koto (or a koto setting on a synth) and feels a good bit like the music on those 1990s Minds Eye audiovisual works. The insistent beat likely lends itself quite well to choreography, which is, after all, the goal of this music.

The drawing room piano textures the introduce Broken Brake evoke images of ballet dancers, and then the track shifts into a soundtrack-y feel. Relatively conventional wordless vocals actually add to the melodic quotient.

Yellow Marrow is as spooky and foreboding as its title suggests. A low hum  not quite feedback  persists throughout the entire track, as otherworldly vocalisms and sounds float in and out of the mix. The track is mysterious and disorienting, suggesting a hall of mirrors or creepy carnival fun house. The first side of the record (yes, Mush-room is available on vinyl) ends with When the Wealthy Were Wise, a fiddle-led track that strongly evokes mental images of northern Africa.

Harpsichord opens Song for Grace, the albums most spaghetti-western styled track, and its most musically straightforward. It recalls some of the work that French outfit Mellow created for the soundtrack of Roman Coppolas 2001 film CQ.

Yawning cellos and plinking acoustic sounds (almost assuredly courtesy of a sampling device) make up the spooky, evocative Between a Rock and a Hard Space. Synthetics  Moogy bass lines and canned percussion  are used to good effect for the buzzing, clattering The Birth of Mush Room. The piano stabs in the tune suggest something major would be happening onstage, but of course without a video, listeners are left with their imagination to fill in the blanks. A vaguely Occidental vibe pervades the track, which also includes some orchestral passages (or mock orchestral, or ersatz-orchestral; one can never tell with The Residents). Other sections of the suite-like track include male vocalisms that again recall the music of northern African nations such as Mali. Near its end, the track evolves/devolves into a cut-up noisefest reminiscent of Beyond the Valley of a Day in the Life.

The Dream I Almost Remember folds in bits of what sounds like film soundtrack music of the 1930s, modern synthesizer, samplers, crashing percussion and more found sounds.

A sweeping string section introduces Only Room for One More Mush, the albums closing track. Its among the most normal and conventional piece of music on Mush-room, but the breaks that punctuate it classify it as soundtrack music. The track shows  if we needed reminding  that if The Residents wanted to make only commercially-accessible music, they could easily do so.

Mush-room is positioned, then, at the commercial end of the spectrum that is the Residents catalog, but those unfamiliar with said catalog should note that commercial is used on a sliding scale here. While Mush-room wont scare (all) your guests away, it certainly aint pop. Nor does it wish to be.

The albums packaging gives away little about the overall production; other than a couple of photos that suggest its both beautiful and grotesque, we know little about what the Mush-room stage presentation might be like. Any other approach, of course, would be inconsistent with what weve come to expect from the originators of the Theory of Obscurity.


The Residents: Sticks and Logs


Residents - Mush-room - Between a Rock and a Hard Space